EDITORIAL: More Yorkers should give local

Township Supervisor Mark Myers went so far as to argue that the board should kill the Hewitt's application even though it fit existing law and wait for the new law to could make the winery illegal.

EDITORIAL: More Yorkers should give local

Dottie Rohrbaugh, left, of Manchester Township pauses while shopping at the Delco Plaza Giant, Monday, Nov. 25, 2019, to listen to a press conference announcing the return of Give Local York. Giant is a presenting sponsor in the fundraiser which will be held May 1, 2020. Rohrbaugh is a former employee of the United Way, which supports event. Bill Kalina photo (Photo: Bill Kalina, The York Dispatch) 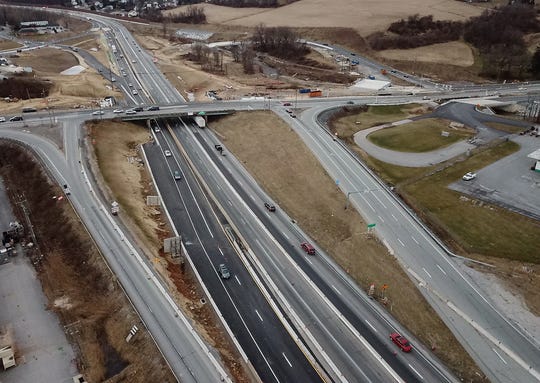 Be aware of changes in the traffic flow in the construction area of Interstate 83 and Mount Rose Avenue. Crews are moving north bound lanes, Sunday, January 27, 2019. John A. Pavoncello photo (Photo: The York Dispatch)

Thumbs up to Give Local York, which this week announced its plans to grow the third annual fundraiser in 2020.

More than 300 not-for-profits received a cut of the $3.2 million raised this spring. In May, organizers hope to boost the number of contributors from about 8,500 to 10,000, they announced this week.

That number should be attainable, as should should besting 2019's cash haul, though organizers haven't said how much money they hope to take in next year.

Thumbs down to the NIMBYites in Hellam Township seemingly obsessed with flouting a property owner's rights and the basic principle of an equal application of the law.

Hellam Township's Board of Supervisors this past week approved Bill and Wendy Hewitt's zoning application for a winery by a 3-2 vote. The vote followed two years of political strife, lawsuit and even a backdoor attempt to change the law in a way that would retroactively scuttle the Hewitt's proposal.

At the hearing this past week, would-be neighbors who clearly had a dog in the fight made themselves out to be experts in audio engineering. Calling themselves witnesses, neighbors attempted to poke holes in the Hewitts' study of how much sound weddings might produce. Under cross examination, they then admitted to not having any background in the topic.

Township Supervisor Mark Myers went so far as to argue that the board should kill the Hewitt's application, even though it fit existing law, and wait for the new zoning regulations that were recently proposed, which could make the winery illegal.

Thumbs down to the incessant headache that is the Mount Rose Avenue project on Interstate 83.

The project won't be completed until late 2020, said an official with Pennsylvania Department of Transportation.

That's more than two years after the original completion date, which was set for summer 2018.

Already more than a year overdue, the traffic nightmare is just 73 percent complete, according to PennDOT.

All the while, I-83 through York County is a congested mess. And, due to strange merging lanes and concrete barriers, there can be little doubt that it's a hazard to motorists.

Al the while, contractor Cherry Hill Construction Inc. continues to wrack up fines and fees for the unfinished project.

But the legacy of the Mount Rose project will far outlive the congestion, as residents will rightly wonder if PennDOT and its private contractors are capable of doing the people's work.