EDITORIAL: Poor condition of many state dams should worry every Pennsylvanian

EDITORIAL: The poor condition of many Pennsylvania dams should be a major concern for all us. A financial commitment must be made to fix the issue.

EDITORIAL: Poor condition of many state dams should worry every Pennsylvanian 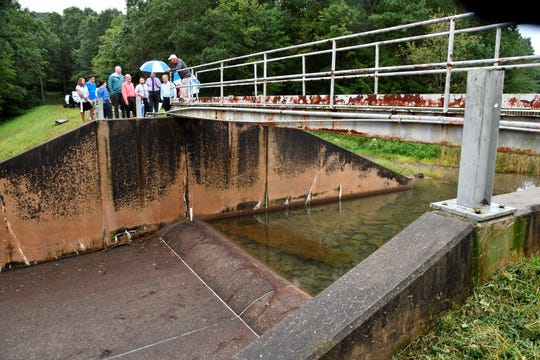 FILE - In this Sept. 28, 2019, file photo, officials look at damage to Heller Dam at Hagerman's Reservoir near South Williamsport, Pa. Pennsylvanians who live downstream from its many dams may not often think about what could happen, but inspectors know there are potential threats to life and property along the state's 86,000 miles of streams and rivers. (Mark Nance/Sun-Gazette via AP) (Photo: Mark Nance, AP)

Infrastructure isn’t the most scintillating topic.

For most folks, it probably rates somewhere between researching tax deductions and discussing life insurance. Just like those two topics, however, you ignore infrastructure issues at your own risk.

That’s why every Pennsylvanian, including the 450,000 folks in York County, should be more than a little concerned about a recent Associated Press report on the condition of the state’s nearly 3,400 dams.

Here’s a quick synopsis. An alarmingly high number of those dams are not in good shape. That’s according to the Dam Safety Division for the state Department of Environmental Protection.

In fact, about 740 are deemed “high hazard,” meaning a structural failure is likely to lead to loss of human life. That more than 20% of the state’s dams. Most of the high-hazard dams are privately owned and more than half are more than 50 years old. Some were even built in the early 19th century.

The agency’s greatest concern, however, is for a group of 145 dams that are rated, in data supplied to the U.S. Army Corps of Engineers, as both high hazard and in either poor or unsatisfactory condition.

Of course, this is not just a Pennsylvania problem. A two-year investigation by the AP identified 1,688 dams nationwide that are rated as high hazard and are deemed to be in poor or unsatisfactory condition.

Rich Reisinger, the chief of the Pennsylvania Dam Safety Division, probably put it best when he said most state residents likely think: “The dam’s been there 100 years. It’ll be there 100 more.”

That’s a very dangerous outlook. Such a lack of vigilance could lead to millions of dollars of property damage and dozens, hundreds or even thousands of lost lives.

It’s happened before. The infamous 1889 Johnstown flood killed 2,200 people. The disaster was blamed on poor maintenance on the South Fork Dam on the Little Conemaugh River, sending a 36-foot wall of water roaring into a populated area at 40 mph.

As recently as 1977, the Laurel Run Dam outside Johnstown failed, killing 40 people.

So, it’s clear, something must be done now to ensure such tragedies don’t happen again.

In Pennsylvania, there’s both good news and bad news on that front.

The state’s dam safety program has a budget that increased from $2.6 million in 2010 — the third most in the country — to $2.8 million last year, the second-most. That’s the good news.

Unfortunately, the program has 28 dam-safety personnel, down slightly from 30 a decade ago. That’s the bad news.

Need for more: There have been efforts to mitigate the threat from high-risk dams. Under a decade-old program known as H2O PA, the state has issued 19 grants for unsafe high-hazard dams, funding projects valued at a total of $50 million. Democratic Gov. Tom Wolf’s infrastructure proposal would steer additional grant money to upgrade dams.

That money must be approved and spent. Yes, spending taxpayer money is never a popular topic for politicians, but our representatives have a simple choice.

They can spend a little for prevention and safety now, or pay a whole lot more later, in both property damage and, much more importantly, lost lives.

We need to make a serious commitment to fix this issue. A ounce of prevention now may save us a pound of cure in the future.