EDITORIAL: Standing up for Greta

Greta Thunberg, the 16-year-old climate activist from Sweden, was trying to make the president melt like a glacier into the floor.

EDITORIAL: Standing up for Greta 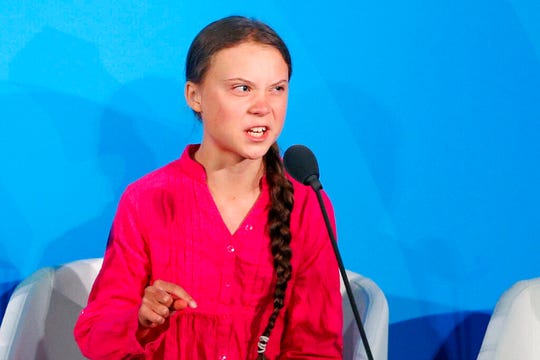 Environmental activist Greta Thunberg, of Sweden, addresses the Climate Action Summit on Monday, Sept. 23, at the United Nations General Assembly at U.N. headquarters. She gives mostly emotionless talks, but on Monday, she shed the stick-to-the-science message and frequently choked up when she scolded world leaders at the United Nations, repeating the phrase "how dare you" over and over in a highly praised address. (AP Photo/Jason DeCrow) (Photo: Jason DeCrow, AP)

And so when the president walked by Greta Thunberg on Sept. 23 at the United Nations, it's not surprising he just looked past her, conspicuously ignoring the stare from the short person on his left who was stopped by his security detail.

Seeing the look in Greta's eyes, it was almost possible to feel sorry for Trump. We certainly were embarrassed for him.

The 16-year-old Swedish climate activist's stare should have melted the president like a glacier.

Greta was at the U.N. General Assembly to talk about climate change. She began a one-girl climate strike in August 2018 that has blossomed around the world, culminating in a Global Climate Strike on Sept. 20 that saw as many as 4 million people taking part in 2,500 events in 163 countries, according to Vox.

She has become the face of the youth climate movement, along with members of The Sunrise Movement and the 21 young plaintiffs in Juliana v. United States who claim inaction on climate change by the U.S. violates their constitutional rights.

But Greta Thunberg is the young person most singly in the eye of the public storm about climate change, the one who calls her Asperger's syndrome a superpower that allows her to focus intently on this single subject, the one who refuses to accept that adults can see the effects of climate change and refuse to do anything about it, the one who took a sailboat across the Atlantic ocean rather than flying to the U.N. for the assembly.

“This is all wrong. I shouldn’t be up here,” Greta said as she spoke at the U.N. Climate Action Summit. “I should be back in school on the other side of the ocean. Yet you have come to us young people for hope. How dare you. You have stolen my dreams and my childhood with your empty words.”

"People are suffering, people are dying, entire ecosystems are collapsing. We are in the beginning of a mass extinction and all you can talk about is money and fairy tales of eternal economic growth," Greta said.

"How dare you continue to look away and come here saying that you're doing enough when the politics and solutions needed are still nowhere in sight," she said. "You say you hear us and that you understand the urgency, but no matter how sad and angry I am, I do not want to believe that. Because if you really understood the situation and still kept on failing to act, then you would be evil, and that I refuse to believe."

Trump, of course, didn't hear her speech. The president, who has said climate change is a hoax created by the Chinese and is certainly doing everything he can to make sure nothing curtails the use of fossil fuels, sat at the climate summit for 15 minutes before going to speak at a different summit on religious freedom.

Later that day, Trump tweeted sarcastically about his encounter with Thunberg: “She seems like a very happy young girl looking forward to a bright and wonderful future. So nice to see!”

Trump is refusing to see what many of us have realized: that the world is changing, that we do have a global existential crisis, and that Greta is the face of the youth who are leading the fight against that crisis because they have the most to lose.

Greta and other youth leaders have done a lot to make climate change a part of every decision and every conversation among nations. It's time for the adults in the room to take on their passion and make the hard decisions that will make sure that the teenagers will still have a planet worth living in when they are Trump's age.