EDITORIAL: What is a good citizen?

If the Supreme Court’s Citizens United decision bestowed personhood on corporations, it’s also fair to say these so-called fellow citizens are psychopathic, focused on making money but not at all concerned with how their greed affects others.

EDITORIAL: What is a good citizen? 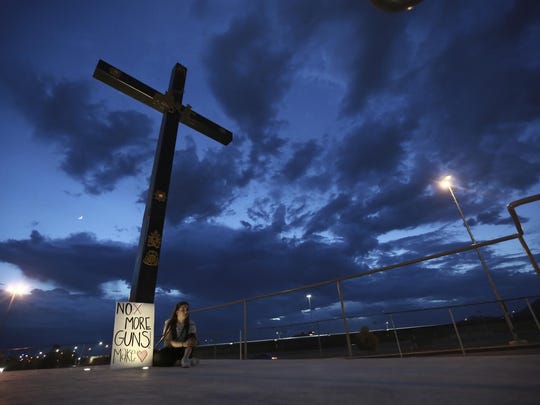 A woman sits next to a sign with a message that reads: Â¨No More Guns! Make LoveÂ¨, in Juarez, Mexico, Saturday, Aug. 3, 2019, where people are gathering for a vigil for the 3 Mexican nationals who were killed in an El Paso shopping-complex shooting. Twenty people were killed and more than two dozen injured in a shooting Saturday in a busy shopping area in the Texas border town of El Paso, the stateâs governor said. (AP Photo/Christian Chavez) (Photo: Christian Chavez / AP)

If the Supreme Court’s Citizens United decision bestowed personhood on corporations, it’s also fair to say these so-called fellow citizens are psychopathic, focused on making money but not at all concerned with how their greed affects others.

That’s not a news flash.

Since 1972 that position basically defined the Business Roundtable, an elite association of the leaders of this country’s largest and most powerful corporations. “Shareholder primacy” — making a buck, legally, above all else — ruled the board rooms.

Last month, though, that nonprofit — which includes the heads of JP Morgan Chase & Co., General Motors, Boeing, IBM, AT&T and Walmart — revised its official “purpose of a corporation,” which now also commits to fair wages and benefits for employees, a diverse workforce and protecting the environment among other changes.

Sounds like the CEOs are woke, and corporations finally are developing a conscience, right?

“After all, the companies they lead have done little to earn the public’s trust and plenty to lose it,” Washington Post columnist Katrina vanden Heuvel wrote recently. “In the years following the financial crisis, they and others battled to dilute any real reforms on Wall Street. They have consistently supported destructive trade and regulatory policies that do lasting harm to workers, consumers and the environment.”

More: Walmart introduces new gun restrictions but will they help?

More: OP-ED: What we keep getting wrong about mass shootings

More: OP-ED: Trump missing an opportunity to burnish his legacy with gun law

We want to believe — especially since the current administration seems to have abdicated all responsibility and is, in fact, leading the buck chase — but it’s going to take more than a revised mission statement.

There is reason to hope, such as automakers’ deal this summer with California to exceed the Trump administration’s gas millage and emission standards.

A glimmer also appeared this week when Walmart announced it’s going to stop selling firearm ammunition at some of its stores and will discourage customers from carrying sidearms in the open.

It was at a Walmart in El Paso, Texas, that 22 people were killed Aug. 3 by a gunman with an AK-style firearm. A few days before that, the Associated Press reports, two Walmart workers were killed by another worker at a store in Mississippi.

In response to earlier mass shootings, Dick’s Sporting Goods halted the sale of guns in some stores, and, as the Associated Press notes, businesses like Starbucks, Target and Kroger also discouraged open-carry.

These businesses are acting knowing full well a vocal minority will clutch their pearls and pistols.

Yet despite widespread outrage and ever-louder demands for commonsense gun laws, Republicans in Congress and at the state level can’t find the backbone to act as Americans deal with one mass shooting after another.

These obstructionist lawmakers increasingly are finding themselves isolated, their NRA supremacy mission more out of step with every passing day.

Until their gone, though, we think we’re better off betting on a corporation growing a conscience.