EDITORIAL: All in a day's work

It all played into another knack our president has: getting so many things so wrong, all at the same time.

EDITORIAL: All in a day's work 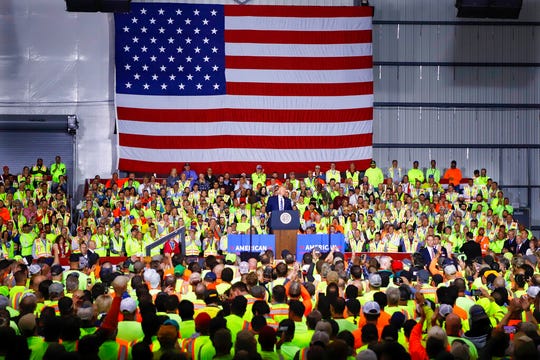 Donald Trump has a knack. He can turn any event into a campaign rally.

That's what he did on Aug. 13 at the Royal Dutch Shell cracker plant being built in Beaver County, in western Pennsylvania.

Some 5,000 union workers were told their work day on that day would be a training day with a guest speaker, the president.

It's not surprising that Trump would want to speak at the plant. After all, it gave him a chance to do some of his favorite activities: encouraging the use of fossil fuels and taking credit for things he really had nothing to do with.

The area's natural gas resources are key to Shell's soon-to-be completed Pennsylvania Petrochemicals Complex. When it's up and running, it will take the natural gas from the Marcellus Shale and turn the ethane gas into a precursor for plastics by breaking down molecules with high heat.

This is the kind of place Trump loves. Soon, environmental groups say, the Shell plant will be the biggest source of air pollution in western Pennsylvania. And it will be helping to create more plastics at a time when people are starting to notice the devastating effects plastics are having on the land, oceans and wildlife.

Trump told reporters as he was leaving the White House for the Shell appearance that the plastic pollution found in every part of the oceans has nothing to do with the United States. "It's plastics that's floating over in the ocean and the various oceans from other places," he said.

The Shell speech was billed as an official White House event, with Trump speaking to the workers about the plant. The president soon turned it into a campaign-style rally, touting his own achievements and belittling his potential Democratic rivals in next year's presidential election. 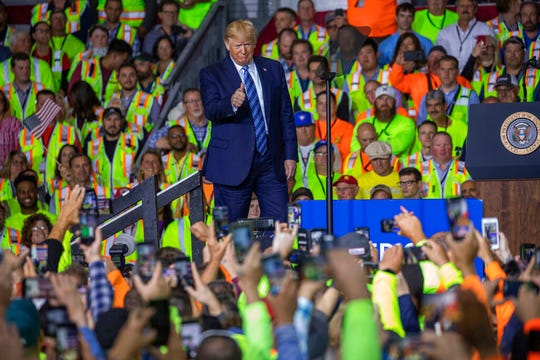 Along the way, he took credit for the creation of the plant the workers are building (it's been planned since 2012) and said he was responsible for creating 600,000 manufacturing jobs (the United States has added 500,000 jobs in manufacturing since he took office).

And through it all, the sea of workers in a variety of fluorescent vests stood and watched and listened and cheered like it was their job.

Which, for that day, it was.

Workers were given the option of not going to the training day event. Whenever there is a training day with a guest speaker, as happens a few times a year, the workers can opt to stay away.

Of course, then they don't get paid.

These workers in particular, members of a dozen unions, have a contracted 56-hour work week, with 16 hours of overtime built in, according to the Pittsburgh Post-Gazette. Many are from out of the area and receive per diems for the costs of being away from their homes.

Anyone who decided to stay away from the training day and Trump rally would have lost that day's pay and would not have been eligible to work overtime on that Friday, the Post-Gazette found.

One union leader said that the pay, benefits and per diem could add up to as much as $700 for one day.

So instead of their usual day of work at the largest construction site in the state, one which taxpayers are footing part of the bill for through massive tax breaks and a $10 million site development grant, the union workers went through some training in the morning and then stood around during Trump's speech in the afternoon, being well-paid props for a White House event that turned into a campaign rally.

And it all played into another knack our president has: getting so many things so wrong, all at the same time. Taking credit for a plant that he had nothing to do with, a plant that will turn natural gas captured through the environmentally devastating fracking into plastics that are now being found even in the depths of the oceans and in the smallest of organisms, and doing it in front of a crowd of thousands, thousands of people who were being paid to be there.

And for our president, it's just all in a day's work.