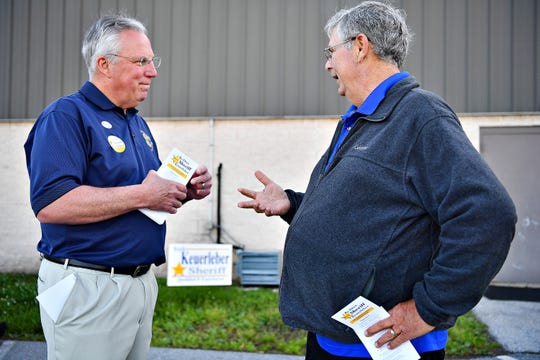 Facing a tough reelection bid against a candidate he barely edged out in a primary this past May, the sheriff handed challenger Shane Becker a ready-made campaign issue by allowing a moneyed friend of the sheriff’s department to sidestep courtroom security.

Specifically, Keuerleber let Bill Hynes, CEO of United Fiber & Data, park in the York County Judicial Center’s private secure lot under the building on July 15 and then, without being searched or screened, attend a proceeding at which — get this! — he was named as the defendant.

It gets worse. The case involved Hynes’ ex-girlfriend, who was seeking a restraining order known as Protection From Abuse against Hynes, whom she alleges abused her, stalked her and threatened her life.

Hynes has a history with the sheriff’s office. The well-known local businessman has donated money to support the office’s K-9 program.

He also has a history with the law. Hynes pleaded guilty to third-degree felony theft by deception in Northampton County in December 2010.

So, to restate the matter, the sheriff allowed someone charged with abusive behavior — a convicted felon, no less — to bypass security to enter a court proceeding.

This is not only unwise, it is dangerous. For obvious reasons.

To no one’s surprise, Democratic candidate Becker lost little time in making political hay of the issue, describing it as just the latest in a string of security breaches that he says he saw during his time as a deputy with the department.

But politics isn’t the only consideration and Becker isn’t the sheriff’s only critic.

The York County Commissioners slammed Keuerleber as being derelict in his duties in allowing what they described as “a serious breach of security.”

They’re going easy on the three-term sheriff, particularly given his cavalier attitude about the incident.

While he says he’ll follow whatever orders the judge puts in place, Keuerleber continues to insist it is within his authority wave security protocols.

That is exactly the wrong message for a law enforcement officer to send.

Public skepticism of policing can be fed by a perception of unequal treatment under the law. By doing a favor for friend, and casually dismissing the reaction, Keuerleber feeds into this very perception.

In his lax treatment of security protocols at the judicial center, the sheriff is something of a triple threat:

The county commissioners continue to weigh their response to the security breach. For his part, Keuerleber insists, “I look forward to whatever changes we’re going to make in the policy and procedures.”

Here’s a suggested change: Demand the sheriff follow all security policies and procedures.