It happened again, this time right here in Pennsylvania. A white police officer shot and killed an unarmed African-American man during an arrest gone bad. And the police officer will face no legal repercussions. 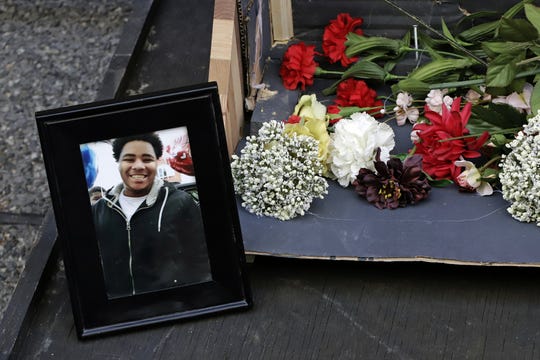 A photo of Antwon Rose II sits with a memorial display for Rose II in front of the Allegheny County courthouse on the second day of the trial for Michael Rosfeld, a former police officer in East Pittsburgh, Pa., Wednesday, March 20, 2019. Rosfeld is charged with homicide in the fatal shooting of Antwon Rose II as he fled during a traffic stop on June 19, 2018. (AP Photo/Gene J. Puskar) (Photo: Associated Press)

It happened again, this time right here in Pennsylvania.

A white police officer shot and killed an unarmed African-American man during an arrest gone bad.

And the police officer will face no legal repercussions.

Former East Pittsburgh Police Officer Michael Rosfeld shot 17-year-old Antwon Rose II in the back last June as the teen fled a traffic stop. Rose was not blameless; another passenger in his vehicle — an unlicensed taxi — opened fire on two men in the streets that evening, striking one, an act that led to police intervention.

Still, Rose should have faced a day in court, not an evening in the morgue.

The officer, Rosfeld, was at least charged in the incident — with homicide. In several high-profile cases — including the police shootings of Stephon Clark in Sacramento; Michael Brown in Ferguson, Missouri; and 12-year-old Tamir Rice in Cleveland; and the chokehold death of Eric Garner on Staten Island, N.Y., at the hands of an off-duty officer — no charges were filed.

But as in other cases where charges were brought — including the shooting death of Philando Castile in Minnesota, and the deaths in police custody of Freddie Gray in Baltimore and Sandra Bland in Texas — Rosfeld’s case ended in acquittal.

If this seems like the usual course of action, well, it is.

“Most police shootings are found to be legally justified,” Philip M. Stinson, an associate professor of criminal justice at Bowling Green State University, told the New York Times. “Under the relevant Supreme Court case law, if an officer has a reasonable apprehension of an imminent threat of serious bodily injury or deadly force being imposed against the officer or somebody else, then they’re justified in using deadly force.”

And it doesn’t even have to be a police officer. Recall, George Zimmerman was nothing more than a Neighborhood Watch volunteer the night he accosted and fatally shot unarmed 17-year-old Trayvon Martin. He was acquitted thanks to a defense aided by Florida’s ridiculous “stand your ground” law.

The 12-member jury in the Rosfeld case, which included three African-American members, took just a few hours to acquit the former police officer late Friday. Protests followed throughout the weekend in and around Pittsburgh — a repeat of the community’s initial response to the shooting. Someone even fired several shots into the unoccupied law office of Patrick Thomassey, Rosfeld’s attorney. 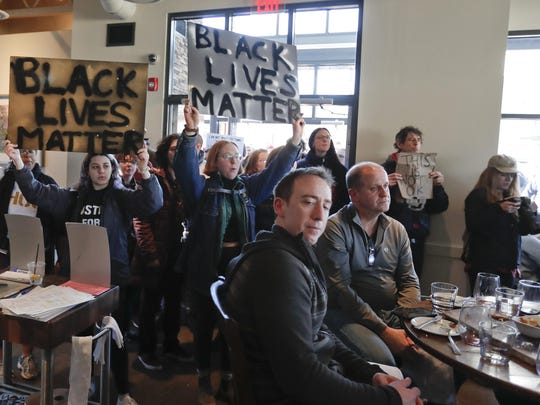 Marchers hold signs and chant after they entered "The Porch" restaurant as patrons pause from their meals near the campus of the University of Pittsburgh Saturday, March 23, 2019. The group called for justice the day after former East Pittsburgh police officer Michael Rosfeld was acquitted in the homicide trial where he was charged with shooting and killing 17-year-old Antwon Rose II last summer near Pittsburgh. (AP Photo/Keith Srakocic) (Photo: Keith Srakocic / AP)

The anger and frustration at the seeming unattainability of justice in too many such cases are understandable, but the lawbreaking is counterproductive — as even the victims recognize.

“Just because there was violence doesn’t mean that we counter that with violence,” said Antwon Rose’s father, choking back his anger and sadness at the jury’s decision to call for peace.

Anger in the streets, a family in mourning, a feeling of justice left unserved, and all of it all too familiar: Clearly the system is broken.

According to the Associated Press, Thomassey told reporters that Rosfeld is “a good man. He said to me many times, ‘Patrick, this has nothing to do with the kid’s color. I was doing what I was trained to do.’”

Then that training needs to be changed. Because if attempted arrests end in fatal shootings of unarmed teens; if 12-year-olds with toy guns or unarmed men holding cell phones in their grandmothers' back yards or frightened suspects fleeing traffic stops end up dead at the hands of police, that training is failing all of us.

And if an unquestioned assertion by a police officer that “I feared for my safety” is all that’s required to deem a fatal shooting legally justified, that legal bar is likewise failing all of us.

New police training is needed, and the justifications for deadly force must be revisited.