As the third government shutdown of the year became a reality, there was little immediacy to be found among Trump administration members over the holiday weekend.

According to Business Insider, White House officials have announced that President Donald Trump is still planning on having Mexico pay for a wall along the US-Mexico border. York Dispatch 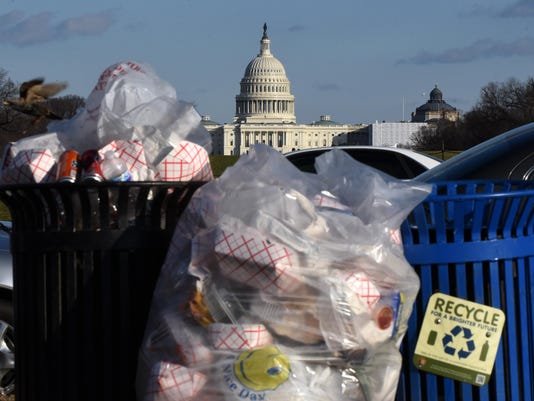 Trash builds up along the National Mall as trash collectors are off work during a partial shutdown of the federal government, on Dec. 24, 2018 in Washington, D.C. Parts of the U.S. government shut down on Saturday for the third time this year after a bipartisan spending deal collapsed over President Donald Trump's demands for more money to build a wall along the U.S.-Mexico border. (Olivier Douliery/ Abaca Press/TNS)(Photo: Olivier Douliery / TNS)

As the third government shutdown of the year became a reality, there was little immediacy to be found among Trump administration members over the holiday weekend.

Incoming Chief of Staff Mick Mulvaney was saying there is a strong likelihood the shutdown will stretch into 2019.

Secretary of the Treasury Steve Mnuchin was playing golf with a full (unpaid) Secret Service detail in tow.

And the person who single-handedly caused the shutdown, President Donald Trump, was throwing tantrums on Twitter, complaining that our “favorite president” (his words, not ours) wasn’t getting enough love from the media for announcing a pullout of U.S. troops from Syria.

Perhaps because the decision was arbitrary, damaging and downright dumb — just like the president’s decision to shut down the government unless he gets $5 billion for his long-promised wall on the Mexican border.

Trump’s reversal on a previous agreement for a short-term government-funding bill (absent dollars for a wall) left egg on the face of Republican leadership in the Senate, where the bill had passed unanimously; highlighted outgoing GOP House Speaker Paul Ryan’s spinelessness (he refused to bring the Senate-approved measure to the floor, where it would have passed, sparing Trump an unceremonious Yuletide budget veto); and sent hundreds of thousands of government workers home for the holidays absent paychecks.

It also capped a series of events that point to an administration flailing if not failing on a number of fronts:

“(T)he president has views that are very distinct from the vast majority of Republicans and probably Democrats, elected and unelected,” Sen. Pat Toomey said Sunday in reference to Syria on NBC’s “Meet the Press.” The Pennsylvania Republican could just as easily have been referring to any number of other issues, including the government shutdown.

Because aside from Trump and his base, there is little public support for a wall on the nation’s border with Mexico — and even less evidence it would solve immigration concerns. If the president ever becomes interested in seriously addressing immigration — rather than using it as convenient, base-stirring cudgel (a la the recent caravan nonsense) — he must work legislatively. Not something for which Trump has shown either inclination or talent.

It has become clear that, despite Trump’s oft-stated insistences, Mexico is not going to pay for the wall. Congressional Democrats have made equally clear that neither should American taxpayers.

Both houses agreed to some $1.6 billion in border-security measures in the short-term funding deal Trump deep-sixed — and would do so again.

If his concerns lie with the smooth functioning of government and shoring up increasingly jittery financial markets, the dealmaker-in-chief should take yes for an answer.

If, however, a spoiled president insists on holding out for wall funding, his future chief of staff is right: This shutdown could last awhile.