At first blush, the death of a 7-year-old Guatemalan child in U.S. custody and a federal judge’s ruling that the Affordable Care Act is unconstitutional might not seem to be closely related. 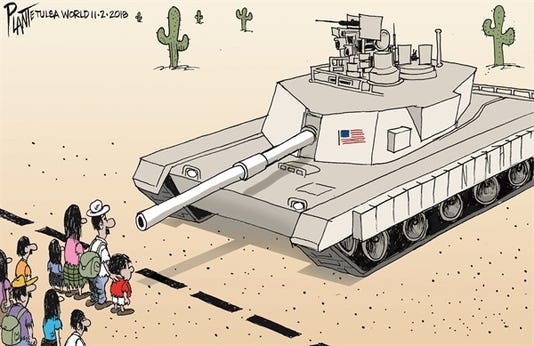 At first blush, the death of a 7-year-old Guatemalan child in U.S. custody and a federal judge’s ruling that the Affordable Care Act is unconstitutional might not seem to be closely related.

In fact, they both are the result of a mindset that places a premium on political supremacy over humane public policy.

How else to explain the now nearly decadelong campaign by congressional Republicans to demean, defund and destroy the Affordable Care Act, a landmark piece of legislation that, despite its deficiencies, has lifted well over 20 million Americans from the ranks of the uninsured?

It’s bad enough GOP lawmakers stood in unanimity against the 2010 bill. It is worse that they have tried and failed dozens of times to undo the legislation. But what is truly galling is how they have prevented this successful legislation from aiding their own voters simply to make a political point.

Even after the federal government offered to pick up the tab for states to expand Medicaid coverage to low-income residents, Republican governors refused. How’s that for constituent service? Just as indefensibly: From cutting advertising funds and sign-up assistance, to halving the enrollment period, President Donald Trump has sought to undermine the popular policy at every turn.

Now, after eight years, two affirmative Supreme Court decisions and a 2018 midterm election in which health care was identified by voters as a more important issue than the economy or immigration, U.S. District Judge Reed O’Connor of Texas, a George W. Bush appointee, has deemed the law unconstitutional.

More: OPED: Will death of girl finally put an end to our immigration gulag?

Make no mistake, this is exactly the type of decision envisioned by Senate Majority Leader Mitch McConnell when he boasts of stuffing the courts with conservative judges.

This is also exactly the type of decision that ignores the needs of the poorest among us — those working Americans who are treading water just above the poverty level and for whom quality health insurance would otherwise be unattainable.

This lack of concern for the less fortunate also emanates from — indeed, seems to be the driving force behind — the nation’s immigration polices since Trump ascended to the White House.

The administration’s ill-conceived policy of separating young children from parents of families applying for asylum at the southern U.S. border is but the most graphic demonstration.

And while that policy has been rescinded, little has changed. Last week, it was disclosed that the government currently holds some 15,000 immigrant children in all-but-overflowing detention camps.

More: After judge’s ruling against Obamacare, what happens now?

Many of these children have U.S. sponsors ready to take them in but, as usual, the Trump administration has gotten in the way. A new policy has prolonged and complicated the vetting process by requiring that every member of the sponsor’s household be fingerprinted for a criminal background check.

Trump’s Health and Human Services officials cite “child safety” as the reason for these checks, though they require no such background checks for the 2,100 workers staffing the camps.

No, the reason for the time-consuming checks is not to protect young immigrants but to discourage their parents from seeking asylum in the first place. Further proof of administrative indifference: Last year, the U.S. managed to lose track of some 1,500 immigrant children.

Thus, when a 7-year-old girl arrived at the border last week dehydrated and in shock, only to die while in Border Patrol custody, the best that an unsympathetic Homeland Security Director Kirstjen Nielsen could muster for her Fox News interviewers was that the tot’s death was “just a very sad example of the dangers of this journey.”

The nation’s immigration and health care policies are crying out for improvement. But Republican leaders have shown time again they’d rather exploit national problems than fix them.