It’s hard to argue with the fact that Pennsylvania’s court-drawn congressional districts more fairly represent the state’s electorate than the screamingly partisan map they replaced. 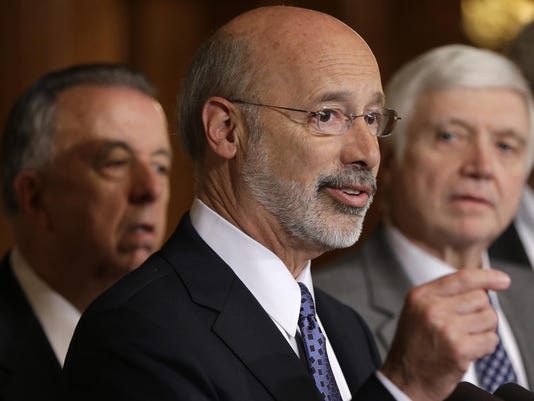 FILE - In this Oct. 7, 2015, file photo, Pennsylvania Gov. Tom Wolf, center, accompanied by state House Minority Leader Rep. Frank Dermody, right, D-Allegheny, and state Rep. Joe Markosek, left, D-Allegheny, discuss state budget negotiations at the state Capitol in Harrisburg, Pa. Pennsylvania's high court issued a new congressional district map for the state's 2018 elections on its self-imposed deadline Monday, Feb. 19, 2018, all but ensuring that Democratic prospects will improve in several seats and that Republican lawmakers challenge it in federal court. The map of Pennsylvania's 18 congressional districts is to be in effect for the May 15 primary and substantially overhauls a congressional map widely viewed as among the nation's most gerrymandered. The map was approved in a 4-3 decision. (AP Photo/Matt Rourke, File)(Photo: Matt Rourke / AP)

It’s hard to argue with the fact that Pennsylvania’s court-drawn congressional districts more fairly represent the state’s electorate than the screamingly partisan map they replaced.

But the job of political map-making shouldn’t fall to judges.

So, a move by Gov. Tom Wolf to get the ball rolling in earnest on a nonpartisan redistricting process is a welcome step.

It’s unfortunate — though hardly surprising — that the announcement was greeted coolly by Republican leaders in the statehouse. After all, they were the beneficiaries of the previously unfair playing field. A little history:

For much of the past decade, Pennsylvanians voted in districts that were national punchlines for political commentators. Having won statehouse majorities in 2010, Republicans set about crafting district boundaries that would solidify their hold on power.

And did they ever! By 2016, the party held 34 of 50 state Senate seats, 121 of 203 state House seats and 13 of 18 congressional seats — despite a statewide Democratic advantage in voter enrollment.

Such lopsided misrepresentation, abetted by brazenly customized districts like the infamous 7th (dubbed “Goofy Kicking Donald Duck”) proved difficult to justify, let alone legally defend. So, when the state’s Supreme Court finally struck down and — after lawmakers were unable to recraft the map themselves — redrew the districts, the only question was, “What took you?”

Now, Wolf is establishing a 15-member commission to determine the best way forward. The group will be chaired by David Thornburgh, president and CEO of the nonprofit Committee of Seventy. Its charge is simple: Find a fair and nonpartisan method of redistricting.

The commission will examine political map-making in other states, gather public input in-state and make recommendations for a new and fair process.

In a tag team press release, the quarrelsome quartet accused the governor of grandstanding and not having the authority to create a redistricting commission.

“With no input from the General Assembly, the Governor issued an Executive Order where he turned his back on both the state and federal constitutions and embarked on another go-it-alone strategy,” they wrote, risibly. After all, the public has seen the type of input Republican leaders in the General Assembly provide when it comes to redistricting. So have the courts.

And these very lawmakers had plenty of opportunity to address the issue this past session. Efforts to revise the process by which political lines are drawn were derailed in both GOP-led houses of the state Legislature this year.

So, Republicans should set aside the partisan pronouncements — excessive partisanship is what caused this problem in the first place — and all sides should allow the commission to do its homework and make its recommendations.

After all, the 2020 Census will necessitate new political maps, and it will ill serve voters if the party that wins statewide representation in the 2020 elections — whichever party that turns out to be — repeats the sins of post-2010 Republicans.