Local advocates for high-quality early education recently celebrated the expansion of pre-K funding that allowed them to accommodate more children and expand programming. 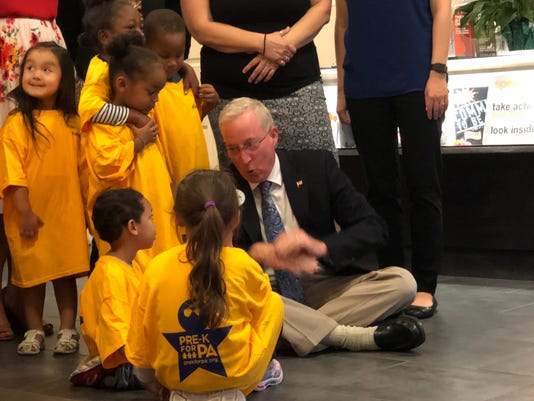 Local advocates for high-quality early education recently celebrated the expansion of pre-K funding that allowed them to accommodate more children and expand programming.

An additional $25 million in funding was added to the state budget this year for early childhood education — $20 million going to PA Pre-K Counts programs and $5 million to Head Start Supplemental.

That’s a good start, but experts say much more is needed to reach all of Pennsylvania’s eligible children.

More than 200 for Pre-K Counts grants were awarded this fiscal year, and one recipient  was the YWCA York, which was able to open a new pre-K classroom for 20 additional students.

That brings the YW’s program, which serves families with incomes up to 300 percent above the poverty level and provides free tuition and subsidies or scholarships for before- or after-school care, up to eight classes for children age 3 to 5.

As supporters rightly point out, high-quality early education is an investment that provides young children the solid start needed to succeed both academically and socially in school.

That increases the likelihood they'll stay out of trouble, graduate from high school and enroll in college or join the military, leading to better career opportunities.

"One of the things you read about Pre-K Counts is it prepares the children to enter the structured format of the school district," YWCA York CEO Jean Treuthart said earlier this month at a gathering of local pre-K boosters.

"What I love seeing is not that we're getting them ready for structure but that we're just lighting the fire of curiosity and discovery," she added.

Unfortunately, many more children who could benefit from a head start remain in the dark.

According to a report released earlier this year, titled “Pre-K works, so why not PA?,” 64 percent of eligible Pennsylvania children — or 112,900 3- and 4-year-olds — are not enrolled in high-quality, publicly funded pre-K.

Child Care Works, which helps connect families with child care, still had 266 eligible York County children on a waiting list for funding spots at the end of September — and some of them had been there for more than four months, she said.

Although providing early education opportunities typically has bipartisan support among Pennsylvania’s lawmakers, they haven’t shown the will to invest the amount of money that’s needed.

While Gov. Tom Wolf and the Legislature did add millions for pre-K to the 2018-19 budget over the summer, much more is needed in order to serve all children at risk of failure.

In January, Pennsylvania Partnerships for Children President Joan Benso estimated an additional $310 million would be needed by the 2020-21 fiscal year.

As Moir noted, "There's so much more that we can do."

For that to happen, though, we need our lawmakers to do more than they have been doing for Pennsylvania's children.