EDITORIAL: Reverberations from 9/11 felt to this day

In some ways, it’s hard to believe it has been 17 years since the Sept. 11, 2001, terrorist attacks: Seventeen years since a morning that dawned cloudless amid almost unbelievably blue skies ended in carnage and catastrophe as hijacked passenger planes struck sites in New York City and Washington, D

EDITORIAL: Reverberations from 9/11 felt to this day 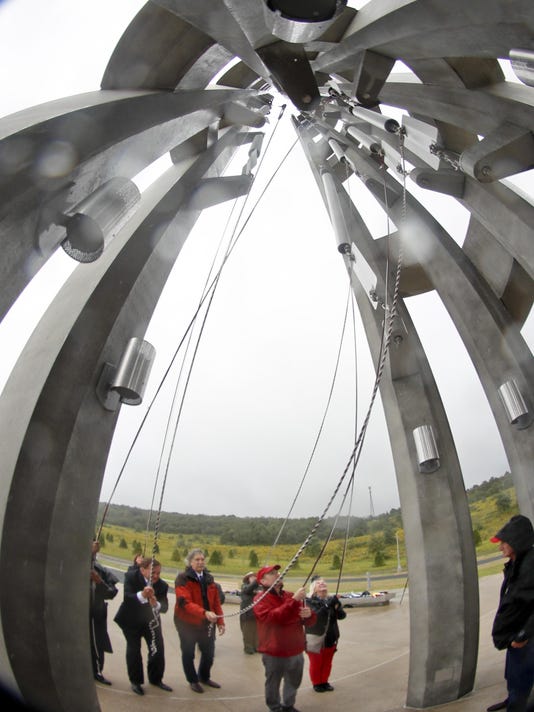 In this photo made with a fisheye lens, Tom Ridge the First U.S. Secretary of Homeland Security, and 43rd governor of Pennsylvania, left, joins in with some of the family, friends and volunteer representatives for the first ringing of the chimes at the dedication of the 93-foot tall Tower of Voices on Sunday, Sept. 9, 2018 at the Flight 93 National Memorial in Shanksville, Pa. The tower contains 40 wind chimes representing the 40 people that perished in the crash of Flight 93 in the terrorist attacks of Sept. 11, 2001. (AP Photo/Keith Srakocic, Pool)(Photo: Keith Srakocic / AP)

In some ways, it’s hard to believe it has been 17 years since the Sept. 11, 2001, terrorist attacks: Seventeen years since a morning that dawned cloudless amid almost unbelievably blue skies ended in carnage and catastrophe as hijacked passenger planes struck sites in New York City and Washington, D.C., and crashed in Shanksville, Pennsylvania.

Life has never been the same — not only for the friends and families of the nearly 3,000 killed in the coordinated attacks, and the many thousands more injured and traumatized, but the emergency personnel, police, firefighters and other responders who demonstrated unworldly poise and bravery amid otherworldly danger and destruction.

Most Americans were lucky enough to be at a safe remove from the tragic events, but we were all struck with the waves of fear and uncertainty that the attacks were designed to trigger.

The reverberations of that black day continue. We see echoes of 9/11 in the form of increased security and police presence at every transportation hub, entertainment venue and major metropolitan center in the nation. The attacks changed the way airliners are designed and altered the very structure of the federal government, adding as it did a Department of Homeland Security.

Thankfully, the healing continues as well.

Another step on that path was taken this past Sunday in Shanksville, where the final major component of the Flight 93 National Memorial was dedicated.

The sound of chimes rang out for the first time from 93-foot-tall Tower of Voices as part of Sunday’s ceremony. When the tower is fully complete, it will feature 40 such chimes — one for each victim of the fated flight.

The heroism of the passengers on Flight 93 kept the plane’s four hijackers from steering the Boeing 757 into its intended target, believed to have been either the White House or the Capitol Building in Washington.

The Flight 93 memorial, which also includes a Memorial Plaza and Visitors Center, will be a place of solace and solemn reflection today as relatives of victims, emergency responders, citizens, and dignitaries including President Donald Trump and first lady Melania Trump commemorate the anguishing anniversary.

It is all part of the long and continuing process of healing.

Another sign: The Cortlandt Street subway stop, directly below the World Trade Center, finally reopened over the weekend.

It has taken a long time to come back from the blow that was 9/11, but the healing — and the resiliency — continue.

What must also continue is a national posture of diligence and vigilance when it comes to guarding against future such attacks.

Much attention has been paid to cybersecurity in recent years and rightly so. Attacks to the nation’s interconnected infrastructure could play havoc with communications, utilities, nuclear facilities, election capabilities and other areas affecting national security and public safety.

But security leaders must not let the very real threats of cyberterrorism distract them from guarding against more traditional means of attack. Neither should other issues usurp the attention and intelligence of those charged with keeping America safe.

For example, Homeland Security Secretary Kirstjen Nielsen and her boss, President Trump, have been disconcertingly preoccupied with activities along the southwestern U.S. border. Let’s hope that attention has not come at the expense of focusing on more serious potential threats.

After all, the very best way to honor those lost, injured and traumatized on Sept. 11, 2001, is to make certain such a day is never, ever repeated.

That should be the foremost thought in the minds of the president, his national security experts, and all those charged with protecting the homeland as the nation mourns all that was lost — and those who were lost — 17 years ago today.