EDITORIAL: Ask the kids what they want

The York County Planning Commission has a novel idea: Let's ask the people who will be adults in 2045 what they want.

EDITORIAL: Ask the kids what they want

The York County Planning Commission and the York Area Metropolitan Planning Organization are soliciting public input until April 30 from anyone who would like to participate in an online survey about the future of transportation in York County.

The public will soon have a chance to view plans for a project that will widen a 5-mile stretch of Interstate 83 from four to eight lanes from Market Street to North George St. John A. Pavoncello photo(Photo: The York Dispatch)Buy Photo

The York County Planning Commission is used to looking at issues in the long term.

It deals with plans that stretch at a minimum three years into the future, while at the same time keeping in play a comprehensive plan that was first envisioned in 1992 and has been updated to look ahead to York County in 2040.

So when the commission started to look at York County's future transportation needs, it was looking far beyond fixing the potholes on Interstate 83 and updating the traffic signals along Route 30.

And while the commission wants to know what today's adults think it should prioritize as it looks 27 years into the future, its planners also came up with a novel idea.

The commission is reaching out to high schools to get young drivers to take its survey on what they would consider the priorities for York County's transportation.

"Because a student graduating from high school this year will be in their mid-40s by the end of this plan, we're hoping to get input from drivers who are 16, 17 and 18," said Mike Pritchard, senior planner with the commission.

The survey asks those taking it to rank objectives ranging from protecting the environment and maintaining a healthy lifestyle to educating people about land use and the movement of goods along with improving affordability, efficiency, reliability, safety and more.

Do teenagers have different opinions about those issues than older people? That's what Go York 2045 aims to find out.

Maybe teens would prefer to make it safer to bike to work instead of widening roads to make room for more vehicles. Maybe they would prefer communities where people could take care of most of their needs within walking distance or where public transportation is a viable option for everyone.

Or maybe they're more concerned that first responders can get everywhere quickly or that businesses have the transportation they need.

One thing is certain: The current generation of teens is not afraid to speak about their thoughts, and they expect their opinions to hold weight.

On March 24, many high school students were among hundreds of people who gathered in downtown York for the March for Our Lives, a sister event to the rally in Washington, D.C., against gun violence.

March for Our Lives was spearheaded by the students who survived the Feb. 14 shooting at Marjory Stoneman Douglas High School in Parkland, Florida, that killed 17 of their classmates and teachers.

That event has pushed students around the country to become more socially active, mostly speaking out about gun violence and the need for gun control but also on other issues that are important to them,

"I think it's time — past time — to make a difference (and) have our voice be heard," Dover Area High School junior Ethan Snyder said at the York march. 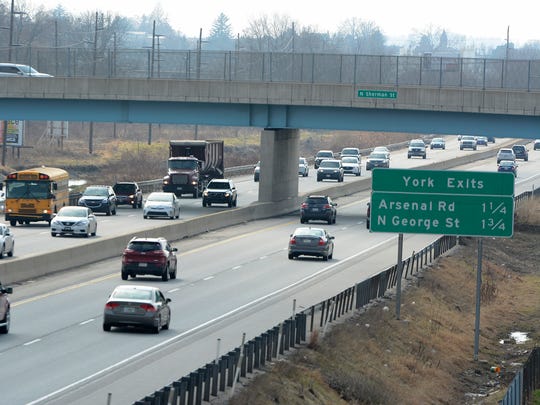 The public will soon have a chance to view plans for a project that will widen a 5-mile stretch of Interstate 83 from four to eight lanes from Market Street to North George St. John A. Pavoncello photo (Photo: The York Dispatch)

Even younger children are going to municipalities and speaking out. Indian Rock Elementary School fourth-grader Olivia Diehl recently spoke to the Spring Garden Township board of commissioners to try to ensure funding for the township's basketball league, which she played in this season for the first time.

And that's great. Communities have been working to get young people involved for decades, and it hasn't always worked.

Getting teens involved in making decisions that will affect their lives as adults is an idea whose time has come. We hope more community groups will take the time to ask young people what they want, take the time to listen to the answers and then act on that information.

After all, those high school students will be the ones driving on the roads — or not driving — long after the rest of us hang up our keys.