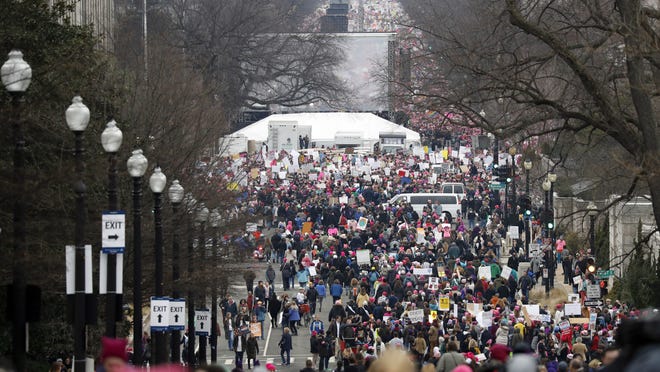 Millions of women marked the day after Donald Trump was inaugurated as president by taking to the streets and demanding recognition and change.

After the reins of government were given to a man who openly bragged about sexual assault and spoke demeaningly of women, women spoke out to say that, even though the country did not elect a woman president, women's voices would be louder and clearer than ever before.

One of the women from York County who traveled to D.C. for the first march will be a speaker at the anniversary march in Philadelphia on Saturday, Jan. 20.

More:Spring Grove teen one of 25 speakers at Philly Women's March

“It was life-changing,” she said.

Gunzelman has spent the past year spreading the fire, including attending protests in front of Republican Rep. Scott Perry’s office, writing about women’s rights in Spring Grove’s student newspaper and repeated protests and public statements at Spring Grove school board meetings against former board member Matt Jansen.

In a voicemail message to a Dallastown pastor, Jansen called a sign at the church that read “Wishing a blessed Ramadan to our Muslim neighbors” “despicable” and called Islam a “godless,” “pagan” religion. Jansen resigned from the Spring Grove board last August, when he moved out of the area.

Beth E. Finn, an organizer with the Women's March on Philadelphia, said upon reading Gunzelman's story, organizers were impressed with her body of activism.

"She’s so young, but she was so active in her work," Finn said. "She really showed persistence."

The sparks turned into a hotter blaze as the past year has brought out the activist in many women. Hollywood led the way with the Harvey Weinstein scandal and the continual calling out of male power brokers who expected women to trade sexual favors for work.

As more women across the country came out with more stories of men who held physical or financial power over them and harassed, assaulted and raped them, the #MeToo movement flamed out, and men began to see that they knew women who dealt with this sort of behavior constantly, and more than that, that nearly every woman has had some encounter along the way, and hardly any of them are reported.

The flames continue to grow, most recently in the Time's Up movement, which saw 300 actresses step up to say that they will use the finances and exposure they have as celebrities to spread the stories of other women as well, the farm workers and waitresses and hotel workers who face the same challenges they have seen but without the money to quit jobs or file lawsuits to stop the harassment.

Now is the time to stoke the fire that women have been building over the past year, to strengthen the commitment to empowering women, to gather forces and push forward.

At the Golden Globes, the women of Hollywood wore black to show their solidarity to the cause. Many women in Congress plan to do the same during Trump's State of the Union address.

And once again, women will come together on Saturday to march and make their voices heard. The Women’s March on Philadelphia will take place from 10 a.m. to 5 p.m.  Saturday, Jan. 20, at Benjamin Franklin Parkway in Philadelphia. Another march is planned in Gettysburg, and one in Baltimore. Across the country and across the world, women are planning to speak out again, protest again and stand together again.

Women took to the streets a year ago to express their outrage. They take to the streets this weekend to focus on mobilizing as a global social and political force.

And they continue to fan the flames, and the mighty winds of change, for a more equitable future.