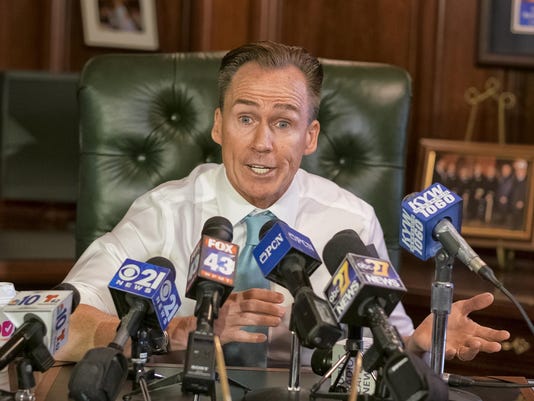 FILE - In a Wednesday April 12, 2017 file photo, Pennsylvania Lt. Governor Mike Stack offers an apology for inappropriate behavior by he and his wife to members of their household staff and security detail, in his Harrisburg capitol office. Pennsylvania Gov. Tom Wolf said Friday, April 21, 2017, that he is stripping Stack, and his wife of state police protection following complaints about the Stacks' treatment of troopers and other state employees. (Ed Hille/The Philadelphia Inquirer via AP, File)(Photo: AP)

It’s expensive, it’s largely irrelevant, and it’s been a source of embarrassment in recent months.

The time has come to eliminate the position of lieutenant governor in Pennsylvania.

That’s why we’re supporting a bill introduced on Monday, Nov. 27, by Rep. Dawn Keefer, R-Dillsburg, to abolish the office — with a tweak.

Pennsylvania’s lieutenant governor has few real responsibilities, including serving as president of the Senate, chairing the state’s Board of Pardons and other duties assigned by the governor.

In reality, the chief role of the lieutenant governor is to become the state’s top elected official in case something happens to the sitting governor.

Under Keefer’s bill, the attorney general would take over control of the Board of Pardons. That seems reasonable.

In addition, there’s no real need to have the lieutenant governor serve as president of the Senate, since it’s a largely ceremonial role.

Line of succession a key issue: That leaves figuring out a new line of succession in case something happens to the sitting governor. That’s where we take issue with Keefer’s bill, which would make the president pro tempore of the state Senate next in line for succession. 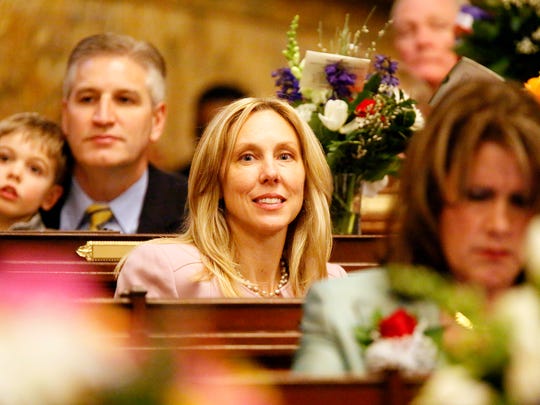 Under the current situation, if something happened to Gov. Tom Wolf, a Democrat, he would be succeeded by a Republican, Sen. Joseph  Scarnati III.

The people of Pennsylvania voted in a Democratic governor. If something happens to him, he should be succeeded by another Democrat. The people’s decision should be honored.

That also would be true if there was a Republican governor and the president pro tempore of the state Senate was a Democrat.

Keefer’s proposed legislation would be best served by inserting language into the bill that assures that a Democrat would succeed a Democrat and a Republican succeeds a Republican.

One of the bill’s co-sponsors, Rep. Kristin Phillips-Hill, R-York Township, seems open to a discussion about that topic as the bill moves through committees.

Eliminating position won't be easy: Eliminating the position of lieutenant governor won’t be easy or quick. It would require a constitutional amendment, which means the legislation would need to pass in the House and Senate in consecutive years before appearing on a statewide ballot.

Just because it’s hard, however, doesn’t mean we shouldn’t abolish the position.

As we’ve discussed, the position is largely irrelevant.

Ah yes, that brings us to Mr. Stack.

Earlier this year, Gov. Wolf stripped Stack and his wife of state police protection following embarrassing complaints about the Stacks’ treatment of troopers and other state employees who tended to their taxpayer-funded residence.

Wolf and Stack were never partners. That’s because in Pennsylvania gubernatorial and lieutenant governor candidates run independently during the primary election before being placed on the ballot together during the general election. It’s a shotgun marriage.

That’s just another reason to eliminate the position.

Of course, Stack sees it differently. His spokesman, J.P. Kurish, said the proposed bill would create a constitutional crisis where an elected governor from one party is replaced by a senator from another party.

That is true, but as we’ve said earlier, that should be tweaked in the proposed bill.

Kurish also said that lieutenant governor is “what you make of it,” and Stack feels he’s done a good job. Kurish pointed to major efficiency improvements made to the Board of Pardons under Stack.

Stack, however, has also brought dishonor to the largely ceremonial position.

Given that background, it appears obvious to us that the lieutenant governor’s position should be eliminated.

Keefer’s proposed bill is not perfect, but it’s a good starting point to begin that much-needed discussion.