GUEST EDITORIAL: Protecting poultry workers is good for them and the economy

Federal, state and local governments need to be cautious in their approach to reopening this nation’s workplaces and follow the best public health advice, including increased screening of the asymptomatic.

GUEST EDITORIAL: Protecting poultry workers is good for them and the economy 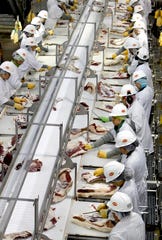 Samuel R. Wilson Jr., a lifelong resident of southern Delaware, thinks it’s a “dumb idea” for his state to test workers at local chicken processing plants for the COVID-19 virus. This observation, reported by the The News Journal, was made Tuesday during an online meeting of the Sussex County Council, on which Wilson has served since 2008.

And why does Councilman Wilson, a farmer himself, think it’s unwise to test plant workers for a disease that has killed more than 61,500 Americans to date during a global pandemic? Because, he said, positive results will deter others from showing up for the job and, ultimately, lead to plant closures.

“Where did (Delaware Gov. John Carney) get the bright idea to … test the poultry workers?” Wilson is quoted as asking during the teleconference. “They’re losing millions of dollars because of this dumb idea.”

You can hear it for yourself on the Wilmington, Del., newspaper’s website, delawareonline.com. On the recording, the councilman is patiently reminded that testing is part of the federal Centers for Disease Control and Prevention guidelines, but he is not persuaded. The health of those essential employees who kill, bleed, defeather, clean and butcher chickens doesn’t appear to enter his mind. Neither does the opportunity to protect the community. His entire argument is based on the financial hardship suffered if one or more plants close, and he clearly wants to avoid that at all costs.

It’s reassuring to know that this is not the prevailing view in either Delaware or Maryland, where Gov. Larry Hogan announced Wednesday that he is working with his counterparts in Delaware and Virginia to improve testing for poultry workers.

What’s truly worrisome about Wilson’s thought process is that it reflects a growing desire — expressed frequently but not uniquely by GOP officeholders — to get the nation working again, regardless of the consequences for the workers on the front lines. It was one thing when COVID-19 appeared to threaten everyone, it’s another when the danger is chiefly directed at grocery store clerks, meat packing plants employees, delivery people and others who don’t have the luxury of teleconferencing to their jobs, like members of the Sussex County Council.

Nationwide, poultry plant workers are more likely to be Latino than white, according to the National Center for Farmworker Health. Would an elected official be nearly as anxious to deny COVID-19 tests to his own family members if they worked in a high-risk environment? What if some were over 60 or had compromised immune systems?

But that’s not the circumstance for most members of Congress, or for President Donald Trump or for first son-in-law Jared Kushner, who recently declared the U.S. coronavirus response a “great success story” and predicts the economy will be “rocking” by July.

These are difficult times. The most recent jobless numbers show another 3.8 million Americans applied for unemployment benefits late last month, which means more than 30 million Americans have lost their jobs in the past six weeks. That’s awful. But unemployment is a circumstance from which one can recover. Death is not.

Federal, state and local governments need to be cautious in their approach to reopening this nation’s workplaces and follow the best public health advice, including increased screening of the asymptomatic. That their absence from the processing line might temporarily hamper the chicken nugget supply chain shouldn’t factor into those decisions.

Keeping these hardworking folks, who often take home $25,000 or less cutting up broilers, healthy should matter. It’s not only good for them, it’s ultimately good for the economy.

— From The Baltimore Sun editorial board.