Journalists who are tasked with sorting fact from fiction have too often become the first target of those who would obscure and even seek to destroy truth in the name of furthering their own will to power. 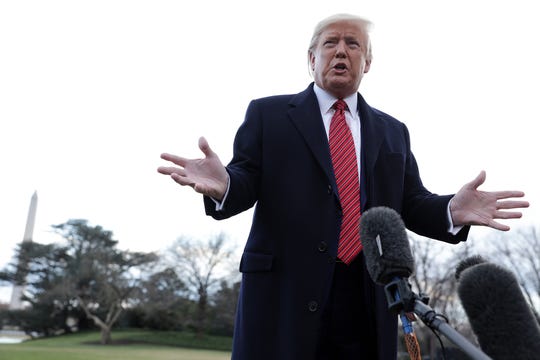 President Donald Trump speaks to members of the media prior to his departure from the White House in Washington, D.C., on Friday, Feb. 28, 2020. President Trump is traveling to South Carolina for a campaign rally. (Photo: Alex Wong, TNS)

In sifting signs of the times, one came through the other day like an alarm bell, the sort of horror that tells us just how dangerous things are becoming and how all people committed to a civil and just society must push back against the creeping darkness.

FBI agents arrested four suspects from four different states as part of a conspiracy “to threaten and intimidate journalists and activists,” according to the Justice Department.

We live in a time when information, even the most basic facts, are in constant question. False information spreads like wildfire while the truth struggles to catch up.

Journalists who are tasked with sorting fact from fiction have too often become the first target of those who would obscure and even seek to destroy truth in the name of furthering their own will to power.

In this charged and dangerous environment, amplified in the poisonous echo chamber of social media, can anyone be surprised that extremists like those arrested this week single out journalists for attack and worse yet mix and mingle racism and anti-Semitism with their attack on the freedoms of press and speech?

In such a time, it is particularly dangerous to see the working press so persistently singled out for ridicule and diminishment.

These arrests are another opportunity for President Donald Trump to put aside his attacks on the free press and to support the work of journalists — even those whose reporting he disagrees with.

It is one thing to disagree. But planting the label fake news on basic reporting — something the president did 273 times last year — and standing by while supporters at rallies harangue and curse members of the press is not acceptable.

It’s important to note that it is the Justice Department, under Trump, that is bringing the case against these alleged extremists — Kaleb Cole of Montgomery, Texas; Cameron Brandon Shea of Redmond, Wash.; Taylor Ashley Parker-Dipeppe of Spring Hill, Fla.; and Johnny Roman Garza of Queen Creek, Ariz.

Everyone should be grateful for that.

But more should be done. Ideas shouldn’t be shouted down on campus just because they offer an opposing view. Free speech shouldn’t be squelched because it doesn’t fit an approved narrative. And leaders — starting with the president — should denounce efforts to undermine, intimidate and harm the press.

The founders understood just how critical a free and robust press is to the function of a democracy. But they didn’t love it, either.

George Washington, of all people, was the subject of brutal press coverage — much of it unfair and false in a way that wouldn’t stand up to modern standards of responsible news organizations. Even the great pamphleteer, Thomas Paine, turned on Washington in bitter response to Washington’s decision not to help free Paine from a French prison.

“Monopolies of every kind marked your administration almost in the moment of its commencement. The lands obtained by the revolution were lavished upon partisans; the interests of the disbanded soldier was sold to the speculator; injustice was acted under the pretence of faith; and the chief of the army became the patron of the fraud,” Paine wrote.

Washington endured it all, knowing that a free Republic must have a free press.

Extremists would like to silence the American conversation. They would prefer a darkness where the only sounds were their own messages of hate and division and even violence.

Arresting and prosecuting people who would use violence to dominate our debates is essential to ensure the rule of law and the right to free expression. It’s the right step for the Justice Department to take.

If it was accompanied by support from the bully pulpit, it would be all the more effective.

— From The Dallas Morning News editorial board.