OP-ED: William Barr and Trump have officially massacred the independence of the Justice Department

William Barr’s fixer factory, an obstruction-of-justice department, can no longer be counted on as any sort of brake against the president’s rapacity and gangsterism. The Tuesday Afternoon Massacre extinguished more lights in our already benighted nation.

OP-ED: William Barr and Trump have officially massacred the independence of the Justice Department 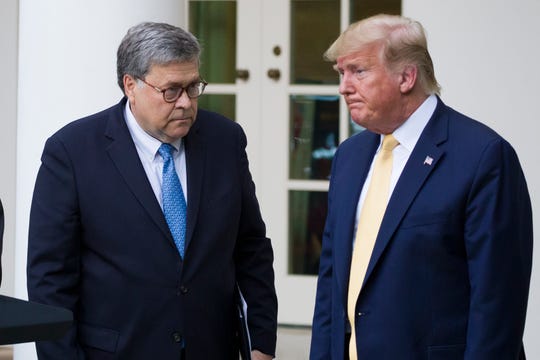 FILE - In this July 11, 2019, file photo, Attorney General William Barr, left, and President Donald Trump turn to leave after speaking in the Rose Garden of the White House, in Washington. Attorney General William Barr took a public swipe Thursday at President Donald Trump, saying that the presidentâ€™s tweets about Justice Department prosecutors and cases â€œmake it impossible for me to do my job.â€ Barr made the comment during an interview with ABC News just days after the Justice Department overruled its own prosecutors. they had initially recommended in a court filing that President Donald Trumpâ€™s longtime ally and confidant Roger Stone be sentenced to 7 to 9 years in prison. But the next day, the Justice Department took the extraordinary step of lowering the amount of prison time it would seek for Stone. (AP Photo/Alex Brandon, File) (Photo: Alex Brandon, AP)

Any bloodshed this week during the so-called Tuesday Afternoon Massacre at the Justice Department was, of course, metaphorical. But the casualties were real.

And while President Trump and his redhats like to cry “coup” and “treason,” and recklessly threaten Civil War II, the bigfoot move by Attorney General William P. Barr’s Department of Justice, on behalf of Roger Stone, may have done more damage to the republic than all the war whoops combined.

Barr’s fixer factory, an obstruction-of-justice department, can no longer be counted on as any sort of brake against the president’s rapacity and gangsterism. The Tuesday Afternoon Massacre extinguished more lights in our already benighted nation.

In November, a federal court jury found Stone guilty of witness tampering, lying to government officials under oath and obstructing a congressional investigation into the Trump-Russia affair. This week, the scrupulously nonpartisan prosecutors who handled the case offered well-reasoned sentencing recommendations: seven to nine years in prison for Stone. They justified the recommendation with chapter and verse. Stone threatened physical harm to a witness, comedian Randy Credico, and he kept at his dirty tricks even after he was indicted.

The president was not happy. Stone was a Trump crony who’d been acting both to advance Trump’s 2016 campaign and to keep Congress from investigating Russian campaign misconduct. The president tweeted that the prospect of substantial prison time for Stone was “horrible and very unfair.” Never mind that Stone was convicted of serious crimes.

The pathetic Twitter hazing might be expected from Trump, but no one imagined that the prosecutors’ recommendations would be flat-out contradicted from the top. Nonetheless, a day after the sentencing recommendations were filed, the judge in the case got a revised sentencing memo on Department of Justice letterhead. This one suggested she give Stone “far less” time than the prosecution team had asked for.

Officials at the White House and the Justice Department said — as usual — that there was no collusion. But it sure looked like Trump’s disapproval of Stone’s recommended sentence was enough to inspire a DOJ in his thrall to jump in and protect Stone.

The four career prosecutors immediately removed themselves from the case. One went so far as to quit the Justice Department itself. Later on Tuesday, Jessie Liu, who had headed the Washington office that oversaw the Stone case, was pulled from consideration for the head job at the Treasury Department. She resigned Wednesday morning. On Thursday, the president accused the Stone jury forewoman of “significant bias,” as former federal prosecutors howled about jury intimidation.

The second sentencing memo not only undermined the DOJ prosecutors, but it also undermined findings implicit in the Stone jury’s guilty verdict. It discounted the idea that Stone was threatening to physically hurt a witness — Credico — when he told him he’d take his therapy dog and texted, “Let’s get it on. Prepare to die.”

For his part, Trump swiftly congratulated Barr for “taking charge” of the Stone case. And as if to erase any doubts about the faltering independence of the attorney general, the president added to his congratulatory tweet an attack on the “vicious” and “corrupt” Russia investigation, led by special counsel Robert S. Mueller III, that had generated the Stone indictment and chronicled Trump’s own extensive efforts to obstruct justice.

To anyone aggrieved when barbarians run roughshod over the law, the smackdown of the prosecutors in the Stone case rings like a death knell for an independent Department of Justice. It confirmed Barr as nothing but a butler to the squalling Trump, adding to his cover-up of the true contents of the Mueller report, which, guess what, did not exonerate the president.

Stone is only one of many Trump advisers to have been found guilty in a court of law. A big prison term for yet another member of the president’s posse would not be good optics in the 2020 campaign. On the other hand, it looks even worse for the attorney general and the DOJ to be running interference for the likes of Stone, a political street fighter, self-described “libertine,” and sometime-lobbyist for some of the world’s worst torturers.

As sickening as the Tuesday Afternoon Massacre was, the spectacle may ultimately serve as a recruiting tool for anti-Trump voters. According to election forecaster Rachel Bitecofer, who nailed the outcome of the 2018 midterms, whatever infuriates the electorate creates a ballot box win these days. Fury at Trump will, in Bitecofer’s model, bring voters to the polls in November, if for no other reason than to make the pain of Trump times stop. (Bitecofer calls the decisive factor “negative partisanship.”)

The cult of Trump is firmly in place in the Senate and the Justice Department. These two once-august institutions won’t stop a demagogue from burning American principles to the ground. Republicans in Congress, the toadies in the executive branch and the president himself are daring us to vote to stop them.

Electing a new president will be our best chance — our only chance? — to start turning the lights back on.

— Virginia Heffernan is an opinion columnist for the Los Angeles Times.