OP-ED: Election must focus on voter needs and future

One of the few things most voters agree on is that political campaigns too commonly devolve into personality feuds rather than substantive, issue-driven debates. That’s unfortunate, because most voters have concrete needs and issues propelling their votes in 2020.

OP-ED: Election must focus on voter needs and future 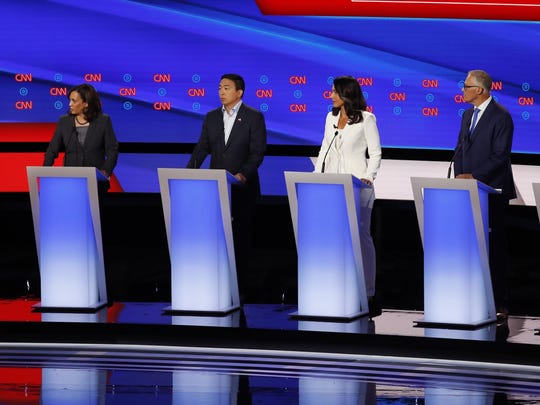 One of the few things most voters agree on is that political campaigns too commonly devolve into personality feuds rather than substantive, issue-driven debates. That’s unfortunate, because most voters have concrete needs and issues propelling their votes in 2020.

Perhaps they are among the 28 million Americans who have no health care coverage — or the many millions more stuck with exorbitant insurance costs and meager coverage. Maybe they had health care but lost it when they were laid off, and are now ailing due to untreated illnesses or are mired in debt.

Maybe they are among the more than half of U.S. adults who, despite this supposedly “booming” economy, are living paycheck to paycheck and at or near the poverty level. Or perhaps they are among the nearly 2 million Americans who work hard, in multiple jobs, for the federal minimum wage of $7.25 an hour.

Or they could be a recent college graduate ensnarled in six-figure debt, among the tens of millions engulfed in the nation’s $1.6 trillion student loan nightmare. Their debt keeps piling higher, intensifying stress levels while diminishing their career options.

More: OP-ED: Census is crucial, but many people may go uncounted

More: OP-ED: Republicans wanted to impeach Trump from the start

The fact is, today’s much-celebrated economy is not working for millions of Americans, who are falling deeper into debt and poverty. About 40 million Americans are living below the federal poverty line, a measure known to greatly underestimate actual poverty.

“Since 1973, American productivity has increased by 77 percent, while hourly pay has grown by only 12 percent,” the New York Times reported in 2018. “If the federal minimum wage tracked productivity, it would be more than $20 an hour, not today’s poverty wage of $7.25.”

Then there are the millions of undocumented immigrants who work America’s toughest jobs for low wages and pay their taxes, yet are under constant threat of deportation. They may have children or other relatives trapped in Trump’s horrendous border prisons, surviving brutal inhumane conditions while enduring relentless scapegoating and racism.

And let’s not forget about the majority of Americans who care about the climate crisis that threatens the planet, our children and grandchildren. Our perilous prognosis — scientists worldwide agree we have about 10 years to make major reductions in greenhouse gasses to have any chance at preventing irreversible catastrophe — becomes grimmer every day, thanks to a president who engages in reckless, irresponsible denial and props up the fossil fuel industries.

This is what voters say they really care about, and on which they seek action and change. These are the concrete realities and urgent crises impacting Americans’ daily lives and futures — and they should be the central focus of the 2020 elections and media coverage.

Instead of fixating on candidate feuds, voters and media should be asking: What are the solutions to these problems? Which candidate offers the bold ideas and a record of standing up and fighting for the changes that so many Americans need and deserve?

The American public is hungry for progress. More than two-thirds of Americans support “Medicare for All” and single-payer health care, surveys show, while only 15% “strongly oppose” this egalitarian shift. The Green New Deal, meanwhile, has 80% support among registered voters. There is also broad public support for a wealth tax, semi-automatic assault gun ban and free college tuition.

Given everything that’s at stake, these crises and their solutions should be the central focus of this election and its coverage. Substance and solutions, not sensationalized campaign squabbles, is what voters care about.

— Christopher D. Cook is an award-winning journalist and author of “Diet for a Dead Planet: Big Business and the Coming Food Crisis.”