OP-ED: Cory Booker falls victim to the curse of the big field

Some people will no doubt complain about the rapidly dwindling number of minority candidates in The Party That Looks Like America — the only other nonwhites still in the field are Andrew Yang, the son of Taiwanese immigrants, and Rep. Tulsi Gabbard (D-Hawaii), who is Samoan American.

OP-ED: Cory Booker falls victim to the curse of the big field 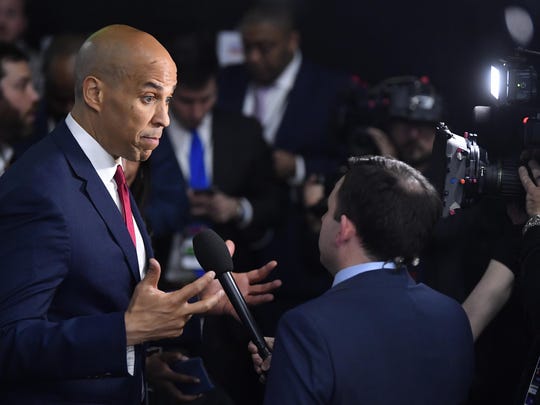 And then there was one.

Sen. Cory Booker (D-N.J.) suspended his campaign for the Democratic presidential nomination Monday, having failed to escape from the low single digits in the national or early-state-primary polls. His withdrawal, while not surprising, leaves the race with only one African American presidential candidate: late entry Deval Patrick, the former governor of Massachusetts who has made barely a ripple in the polls. And it comes on the heels of Julian Castro’s withdrawal, so there’s no chance a Latino Democrat will face President Trump in November.

Some people will no doubt complain about the rapidly dwindling number of minority candidates in The Party That Looks Like America — the only other nonwhites still in the field are Andrew Yang, the son of Taiwanese immigrants, and Rep. Tulsi Gabbard (D-Hawaii), who is Samoan American. But one thing the winnowed candidates have in common is mushy messages and hard-to-define missions.

Booker is a likable man who was running as an uplifting force, a unifier for a sharply divided America. His go-to word in the campaign was “love,” which certainly differentiated him from the incumbent. (That seemed to be Marianne Williamson’s theme too, meaning there was no market for a love candidate in 2020. Just imagine the campaign ads we’re not going to see … ) And it goes without saying that Booker would be a better president than Trump. But after watching him in the debates, I can’t tell you how his approach to governing is different from any other candidate’s. He, like Beto O’Rourke and Kamala Harris, was a charisma candidate, and that isn’t enough this go-around.

More: As caucuses near in Iowa, Dems race is wide open

Why? I’d point to a couple of factors. First and foremost, the Democratic field was so big, the amount of background noise made it hard for anyone to stand out. That worked to the advantage of well-known figures such as former Vice President Joe Biden and Sen. Bernie Sanders (I-Vt.), who started the race with a cushion and have pretty much held on to it. Same for Sen. Elizabeth Warren (D-Mass.), who’d already developed a big following among progressives.

Everyone else needed a distinct and consistent focus or a clearly distinguishing feature just to get attention. Think about it — you can rattle off at least one thing about almost all of the remaining contenders. Yang, for example, is the guy who thinks automation is killing so many jobs, the government should pay everyone $1,000 a month. That may be reductive and unfair to candidates who put a lot of work into having a complete platform, but it’s the reality of a race with too many speakers and not enough microphones.

The second factor I’d cite is the unusual nature of the incumbent. Sanders and Tom Steyer, the investor turned activist turned presidential candidate, insist that it will take an unconventional candidate to defeat Trump. Meanwhile, middle-of-the-road candidates such as Biden and Sen. Amy Klobuchar (D-Minn.) say voters are hungry for a return to normalcy. Either way, Booker and the other folks who’ve fallen by the wayside represented neither a complete break with convention (except for Williamson, who proved that simply being unconventional isn’t enough) nor a pendulum-swing back to the salad days of pragmatic policymaking and bipartisan governing of the Clinton presidency.

It’s a shame that the Democratic field is becoming less diverse, but it’s a very good thing that it is finally shrinking to a size that enables meaningful scrutiny by the voters. You may wish for different choices — more youthful candidates, say, or more impressive records of accomplishment — but at least your attention will be divided among fewer of them.