On Jan. 1, Pennsylvanians awoke to not only a new year, but a new decade. Little did they know that on New Year’s Eve the checking account of the commonwealth was overdrawn by $904 million. 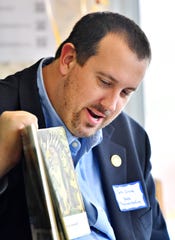 On Jan. 1, Pennsylvanians awoke to not only a new year, but a new decade. Little did they know that on New Year’s Eve the checking account of the commonwealth was overdrawn by $904 million.

The overdraft actually started Oct. 31, only four months into the fiscal year. The normal process to address cash-flow shortfalls is for the state treasurer and auditor general to approve a Short-Term Investment Pool (STIP) loan to cover this shortfall. This time they approved a loan of $1.5 billion, which means taxpayers will incur an extra $11 million in new costs to borrow taxpayers’ money sitting in hidden accounts to bailout the General Fund.

This fiscal year is reflecting a $257.8 million deficit, which is surprising since the difference between the estimated revenues and approved budget is $521.5 million. This means we should have a half billion dollar surplus.

There is a proposed supplemental, or overspend, of $779 million. According to the Office of the Budget, the Department of Human Services (DHS) is the sole source of the overspending. While the 2019-20 financial statement reflects bad financial news, it does show the $340 million we now have in the Rainy Day Fund. Had the General Assembly spent this surplus last year, the expenditures would be $300 million more adding to the deficit.

The main driver behind this financial mismanagement of your money is consistent deficit budgeting. In the past six years, only one time did total revenues surpass total expenditures, and that fiscal year just happened to be the nine-month budget impasse during Gov. Tom Wolf’s first term in office.

While Pennsylvania does have a constitutional provision requiring a balanced budget, it only applies to when the governor signs the revenue estimates. There are allowances for the governor to place expenditures in budgetary reserves to reduce spending throughout the fiscal year to maintain the balanced budget constitutional provision. As we are projected to have a $257.8 million deficit due to $779 million of overspending, one would think an astute financial planner would appropriately adjust spending.

This shows failures in the constitutional and legal financial governance of the commonwealth. Recently a group of legislators proposed commonsense reforms to address these underlying issues without the need to take more of your money:

As you can see, these proposals provide much improved financial governance without the same old stale, status quo solution of needing more money. These commonsense solutions focus on reducing our borrowing, improving our credit rating and strengthening the Commonwealth’s Rainy Day Fund. Most importantly it would lock in prudent financial management into the Constitution, which will ensure these policies won’t be legislatively cannibalized by a simple majority.