Edgar Allan Poe had more range and skill, but both he and Trump are singularly able to render the interior life of a barking lunatic who thinks he’s a genius and keeps confessing more than he ought to.

The president, vice president and Senator Kristin Phillips-Hill (R-York) had their turns at the mic during the "Keep America Great" rally. York Dispatch

True! — very, very dreadfully nervous I had been and am; but why will you say that I am mad? The disease had sharpened my senses — not destroyed — not dulled them.

So begins Edgar Allan Poe’s marvelously twisted 1843 short story “The Tell-Tale Heart,” in which a madman recounts murdering a neighbor, burying the dismembered body and blurting out a confession to the police.

The narrator, all the while, insists he is utterly sane. Or more than sane. Shrewd. A stable genius. Perfect. To prove his point, he liberally uses exclamation points. Hark! Ha!

Sound familiar? I don’t mean to imply that President Trump is some kind of goth killer. My point is that Trump’s prose — which appeared in a long, marvelously twisted letter Tuesday — resembles Poe’s.

Poe had more range and skill, but both writers are singularly able to render the interior life of a barking lunatic who thinks he’s a genius and keeps confessing more than he ought to. 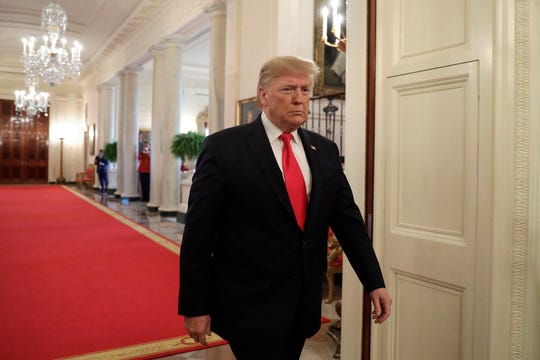 Like Poe’s narrator, Trump kicks off his story by designating a mortal enemy. In Trump’s case, this is, of course, House Speaker Nancy Pelosi, D-Calif., to whom the screed was addressed.

Where the “Tell-Tale Heart” speaker imagines that the old man next door has the “eye of a vulture,” Trump has observed, with equal creepiness, that Pelosi’s “teeth were falling out.” He complains bitterly in the letter, blaming Pelosi for his impeachment and going full Poe: “It is a terrible thing you are doing,” he writes. “But you will have to live with it, not I!” The letter really does suggest he could benefit from inpatient care.

The concept of terror and the terrible is central to Poe’s work. When the narrator in “The Tell-Tale Heart” creeps into his neighbor’s room, he perceives “mortal terror” in the old man, which he recognizes as something he has experienced himself. That recognition in turn provokes “uncontrollable terror” in the narrator.

The narrator kills the old man out of terror, but also to end their mutual terror. Instead, the murder amplifies the ambient terror to a deafening roar.

This is a very Trumpian cycle. Ever since he snapped, “No puppet, no puppet, you’re the puppet” at Hillary Clinton, then his presidential opponent, Trump has made it clear he lives and dies by projection. Whatever he fears in himself, he imputes to another person.

Read the Tuesday letter, and it’s clear: Trump is scared as hell. And scared people are scary.

Pelosi has signaled since September that the House is committed to a methodical impeachment process. But in spite of her prudence during the impeachment inquiry, Trump sees in her every kind of bellicosity. In the letter, the president charges her with “a full-fledged case” of “Trump Derangement Syndrome.”

Likewise the Poe narrator imagines his placid, sleeping victim is deranged. He perceives an “overcharged” soul in the sleeping man’s snores. He believes he can hear the man’s heart beating and decides it’s a symptom of the man’s fear — and not his own.

Trump solicited foreign intervention in the upcoming 2020 election, and multiple former federal prosecutors agree that he should be indicted on multiple counts of obstruction of justice. So Trump, as usual, offloads these facts onto Pelosi and the Democrats: “You are the ones interfering in America’s elections. You are the ones subverting America’s Democracy. You are the ones Obstructing Justice.”

Finally, like Poe’s narrator, Trump credits himself for stable ingenuity, even as every sentence he writes speaks to his madness. “There are not many people who could have taken the punishment inflicted during this period of time,” he writes, “and yet done so much for the success of America and its citizens.”

It’s a quiet sentence, a brief clearing in the forest of erratic capitalization and exclamation points. But it’s Trump talking to himself, telling himself, as Poe’s narrator does, that while everyone else is crazy, “I was singularly at ease.”

Alas, ease is in short supply. The president and Poe’s murderer both come across as trapped in their own heads, and surrounded by grating, menacing and deranged voices they try to tell themselves come from the outside.

But the pretense can’t last. Trump’s fate is of course still uncertain. But in Poe’s narrator, the voices grow too loud to repress. He begins to believe the police are laughing at him. (Being laughed at by investigators: also a Trump fear.)

The narrator in “The Tell-Tale Heart” cracks.

Until: “I admit the deed! — tear up the planks! here, here! — It is the beating of his hideous heart.”

Will Trump to give himself up? Not so far, though he does tend to blurt out self-incriminating stuff on the White House lawn and in his tweets. And he did freely turn over the notes from his July call to the Ukrainian president, which essentially led to his impeachment.

And then there’s the time he boasted he could get away with murder.

That was the bet the narrator made in “The Tell-Tale Heart.” Poe would have us believe that no matter how many floorboards are hammered down to cover up someone’s crimes, the truth will out and justice will prevail.

We can only hope.

— Virginia Heffernan is a regular contributor to the Los Angeles Times’ Opinion section.