OP-ED: Our nation is in dire need of a few good Republicans

What now? Impeachment in the House seems inevitable; so does acquittal in the Senate. But what our nation needs more than anything right now is a few good Republicans willing to place principle over part

OP-ED: Our nation is in dire need of a few good Republicans 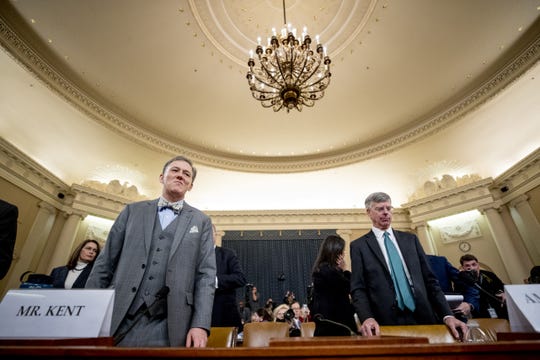 During his testimony before the House Intelligence Committee on Nov. 13, Ambassador William Taylor described our diplomatic relations with Ukraine in terms of two channels. The first emanates from the Department of State and is managed by diplomats and staffers under the oversight of the ambassador and secretary of state.

The second, as described by Taylor, Russia expert Fiona Hill, Ambassador Gordon Sondland and other witnesses, was a “highly irregular” channel operated by an ad hoc team comprised of Ambassadors Sondland and Kurt Volker and Secretary of Energy Rick Perry, all under the guidance of President Donald Trump’s personal attorney Rudy Giuliani.

But, asked Stephen Castor, the lawyer charged with questioning the witnesses on behalf of the Republicans, “In fairness, this irregular channel of diplomacy, it’s not as outlandish as it could be. Is that correct?”

More: ANALYSIS: Lots of impeachment evidence but one thing missing

Well, yes, the irregular channel could have been more outlandish. Volker, Sondland and Perry, “The Three Amigos,” might have actually attended embassy dinners dressed in black mariachi outfits and sombreros. Now, that would be outlandish!

Instead, all The Three Amigos did was jeopardize the fledgling, reform-minded government of an important ally, undermine that nation’s effort to defend itself from an aggressive adversary and strengthen the hand of international bad actor Russia, all in an effort to gain a domestic political advantage for Trump.

Certainly any outlandish scheme can be more outlandish. But the peculiar weakness of this argument exemplifies the transparency of the defense that the Republicans gamely mounted during more than 30 hours of testimony.

Mostly the Republicans made the same arguments over and over. The Democrats, they asserted, began their campaign to impeach Trump even before his inauguration; some testimony was taken in closed-door sessions; the military aid eventually reached the Ukrainians so there can’t have been anything fishy going on; Chairman Adam Schiff isn’t being fair; where’s the whistleblower?; and so on.

All of these claims are either irrelevant or highly disputable. Nevertheless, they were stubbornly repeated virtually every time the Republicans had the stage.

As the hearings wore on, Republicans tried to pick away at the case against the president by attacking the witnesses themselves. Without evidence they impugned the loyalty of foreign-born Lt. Colonel Alexander Vindman. They even questioned why he, a full-time officer and combat veteran, was wearing his military uniform.

Without evidence, Republicans suggested that David Holmes, the political counselor at the U.S. embassy in Ukraine who overheard the awkward phone conversation between Sondland and Trump, had mishandled sensitive information. They as much as accused him of perjuring his testimony — again, without evidence — even though, in large part, it was corroborated by Sondland’s testimony.

If the Republicans had better arguments they wouldn’t have to rely on flimsy ones such as these, nor would they have to repeat them constantly.

Did Trump withhold a White House meeting and military aid from Ukraine, at a time when it desperately needed both, in exchange for help with his re-election? The evidence against Trump is overwhelming. I cannot summarize the many hours of testimony any better than Chairman Adam Schiff did on the last day: “He did it.”

What now? Impeachment in the House seems inevitable; so does acquittal in the Senate. But what our nation needs more than anything right now is a few good Republicans willing to place principle over party.

I had a fleeting hope for Rep. Will Hurd, a soft-spoken, moderate Republican from Texas who had the courage to serve as an undercover C.I.A. officer in Afghanistan, as well as to stand up to Trump on his border wall and other issues. Alas, on the last day of testimony he hewed close to the party line.

But it’s not too late for Hurd and other Republicans to weigh carefully the competing interests of their own political futures versus the acknowledgement of the truth and the primacy of the rule of law in our country.

Courage is contagious. The public integrity of only a few Republicans could change the arc of this sorry episode back toward the stringent accountability required by the Constitution of those in public office.

— John M. Crisp, an op-ed columnist for Tribune News Service, lives in Georgetown, Texas, and can be reached at jcrispcolumns@gmail.com.