OP-ED: Trump takes his insults to a new low

The commander in chief of America’s armed forces took to Twitter on Tuesday morning to shred the reputation of one of his own soldiers — Lt. Col. Alexander Vindman, an Army officer with more than 20 years of service, including a tour in Iraq in which he was wounded and awarded a Purple Heart.

OP-ED: Trump takes his insults to a new low

The commander in chief of America’s armed forces took to Twitter on Tuesday morning to shred the reputation of one of his own soldiers — Lt. Col. Alexander Vindman, an Army officer with more than 20 years of service, including a tour in Iraq in which he was wounded and awarded a Purple Heart.

Vindman, the White House’s top Ukraine specialist on the National Security Council, was testifying to impeachment investigators Tuesday about how Trump and his administration tried to strong-arm Ukraine into conducting a sham corruption probe of a political rival, former Vice President Joe Biden.

Vindman knew about this because he, among others, participated in a July phone call in which Trump asked Ukraine’s leader to do exactly that. Vindman had also joined an earlier White House meeting in which Trump’s ambassador to the European Union, Gordon Sondland, told a Ukrainian delegation that a meeting with Trump (quid) would only occur if their country investigated Biden (quo).

Trump, confronted by a mounting pile of damaging evidence, would have none of this. So he reverted to form, hopping on to Twitter to lash out at Vindman. 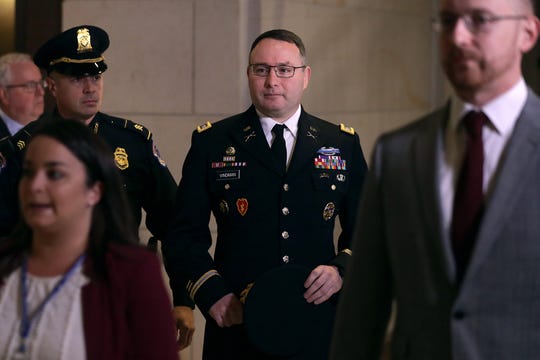 “How many more Never Trumpers will be allowed to testify about a perfectly appropriate phone call when all anyone has to do is READ THE TRANSCRIPT!” he offered. “I knew people were listening in on the call (why would I say something inappropriate?), which was fine with me, but why so many?”

A short while later, Trump tweeted again: “Supposedly, according to the Corrupt Media, the Ukraine call ‘concerned’ today’s Never Trumper witness. Was he on the same call that I was? Can’t be possible! Please ask him to read the Transcript of the call. Witch Hunt!”

Vindman is a soldier and an adult, and undoubtedly he knew this would be coming. He was also born in Ukraine when it was still part of the Soviet Union and migrated with his family to the U.S. in 1979 when he was 3½ years old. On Monday night, Fox News host Laura Ingraham and John Yoo, a former Justice Department official, jointly suggested on TV that Vindman might be a spy. Brian Kilmeade, a host of the morning show “Fox & Friends,” had fun Tuesday speculating about Vindman’s “affinity” for Ukraine.

All of this probably explains why, at the top of his testimony, Vindman offered a synopsis of his career.

“I have a deep appreciation for American values and ideals and the power of freedom. I am a patriot, and it is my sacred duty and honor to advance and defend OUR country, irrespective of party or politics,” he noted in his prepared remarks. “For over twenty years as an active duty United States military officer and diplomat, I have served this country in a nonpartisan manner, and have done so with the utmost respect and professionalism for both Republican and Democratic administrations.”

Vindman’s service and patriotism don’t matter much to the president or his TV apologists. Vindman’s service and patriotism should matter to everyone else, though, regardless of party or ideological persuasion. Trump’s attacks on institutions and the rule of law are old hat. His personal attacks on individuals are even uglier, if just as depressingly familiar.

And Trump has been at this a while.

He spent decades in New York slagging local politicians, business competitors and the media before climbing onto the national stage. Embracing birtherism and casting doubt on Barack Obama’s nationality was one of his early political parlor tricks, and proved to be a warm-up act for his 2016 presidential bid.

Early in that campaign he called into question the late Sen. John McCain’s military valor. McCain, you remember, was held captive for six years during the Vietnam War. Trump successfully engineered five deferments so he wouldn’t have to serve in Vietnam.

Another memorable moment during the 2016 campaign occurred when Trump repeatedly attacked Gonzalo Curiel, a federal judge who was presiding over fraud litigation involving Trump University. Although Curiel was born in the U.S., Trump said the judge’s Mexican heritage made him unfit to hear the case. Earlier this year, Trump repeatedly suggested that four female Democrats of color, three of whom were born in the U.S., “go back” to their ancestors’ countries.

Last week, Trump repeatedly questioned the patriotism of William Taylor, a career soldier and diplomat who is now the senior U.S. representative in Ukraine. Taylor has also testified that Trump personally and explicitly tried to force Ukraine to investigate the president’s political opponents. And Trump has tried to put Taylor in the same barrel as Vindman, also labeling him a Never Trumper.

The president has put exhibitionism and gimmickry ahead of public service his entire life. And that’s reminder enough why this is a moment for everyone else to stand behind patriots like Vindman and Taylor who have chosen to step into Trump’s crosshairs.

— Timothy L. O’Brien is the executive editor of Bloomberg Opinion. He has been an editor and writer for the New York Times, the Wall Street Journal, HuffPost and Talk magazine. His books include “TrumpNation: The Art of Being The Donald.”