OP-ED: If Trump’s Ukraine call doesn’t wake up Republicans, nothing will

The president is fuming over the decision Tuesday by House Majority Leader Nancy Pelosi and other top Democratic leaders to start an impeachment inquiry over his alleged efforts to entice a foreign power to interfere in a U.S presidential election.

OP-ED: If Trump’s Ukraine call doesn’t wake up Republicans, nothing will

The president is fuming over the decision Tuesday by House Majority Leader Nancy Pelosi and other top Democratic leaders to start an impeachment inquiry over his alleged efforts to entice a foreign power to interfere in a U.S presidential election.

Let the president fume. He’s brought this on himself, and the just-released White House record of his phone call with Ukrainian President Volodymyr Zelenskiy proves the Democrats are right to act.

That should be enough to make Republicans’ blood boil.

Let’s see if it does. 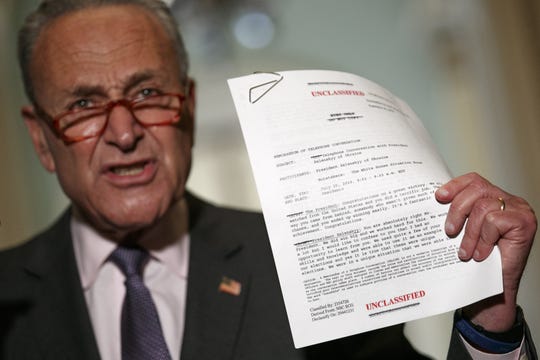 Senate Minority Leader Sen. Chuck Schumer of N.Y. holds up a copy of a White House released rough transcript of a phone call between President Donald Trump and the President of Ukraine as Schumer speaks to the media about an impeachment inquiry on President Trump, Wednesday Sept. 25, 2019, on Capitol Hill in Washington. (AP Photo/Jacquelyn Martin) (Photo: Jacquelyn Martin, AP)

A few months ago, I believed that a Democratic-led impeachment of Trump over the firing of then-FBI director James Comey was justified based on the president’s clear abuse of power. But I also saw impeachment at that juncture as politically unwise.

In light of the Comey firing and Trump’s comments that he did it with “this Russia thing” in mind, Congress had the moral and political imperative to hold the president accountable. But at the time of Comey’s ouster, the House was controlled by Republicans, and nothing happened as Congress abdicated its responsibility to serve as a check on the president.

But once the Democrats regained control of the House in the 2018 election, impeachment moved from the right thing to do in defense of the institutions of government and the balance of power to what could be perceived as a partisan attack. And with the Senate still controlled by the GOP, the effort would have failed, leaving the president emboldened as he headed into the 2020 campaign.

The politics haven’t changed much, though I hope this record of the conversation with Zelensky opens some Republican eyes.

Still, the path to impeachment is not clear. But it must be pursued not because Trump is such an atrociously bad president who has damaged the nation’s international standing, exploited domestic divisions by embracing white nationalists and disparaging people of color, and actively worked to destroy the health of the earth for a few short-term bucks for the oil and gas industry.

It must be done for the sake of the republic, for our notions of a democratically elected government whose three branches serve as checks on one another, and as a rebuke to Trump’s fundamental authoritarianism. He acts as though he believes he is above the law, and it is the responsibility of Congress — Democrats and Republicans alike — to rein him in.

Risky? Yes. Divisive for the nation? Of course, but really, can we get any more divided than we are now?

The Democrats are displaying here just the kind of political maturity the nation requires. A democracy is only as strong as the people’s faith in it, and for too long politicians have put party loyalty ahead of what is best for the country.

If the Democrats’ inquiry leads to a vote impeaching the president, they risk giving ammunition to Trump’s mewling claim that he is a victim. They risk, if they fail, tilting the scales toward Trump’s reelection. They risk a voter backlash that could cost some of them their House seats.

Yet they opened the inquiry anyway, because the stakes are too high not to have done so. And Republicans need to join them in putting country ahead of party for a change.

Trump’s approach to nearly everything can be summed up in the infamous taped conversation with “Access Hollywood” interviewer Billy Bush, in which Trump bragged that he could grab women by the genitalia because “when you’re a star, they let you do it. You can do anything.”

He’s still following the same playbook: When you’re a president, just do what you want, norms and laws be damned, until someone stops you.

It’s time for Congress to stop him.