OP-ED: With Bolton booted, so much for Trump’s ‘team of rivals’

It wasn’t news that President Trump and his national security adviser John R. Bolton often disagreed. The difference of opinion now extends to whether Trump accepted Bolton’s offer to resign (Bolton’s story) or Trump “asked John for his resignation” (as Trump tweeted).

OP-ED: With Bolton booted, so much for Trump’s ‘team of rivals’ 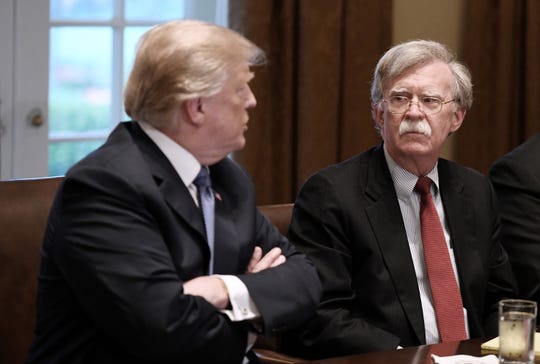 It wasn’t news that President Trump and his national security adviser John R. Bolton often disagreed. The difference of opinion now extends to whether Trump accepted Bolton’s offer to resign (Bolton’s story) or Trump “asked John for his resignation” (as Trump tweeted).

In any case, Bolton’s departure shows how ridiculous it was for Trump to suggest that he was comfortable with a “team of rivals” approach in which advisers would present him with a variety of opinions and Trump, without taking umbrage, would choose the best option. It takes a decisive and firmly grounded leader like President Lincoln to make that work, but Trump is no Lincoln.

“There is no infighting whatsoever,” Trump said in a May 15 tweet about reports of dissension in the administration about Iran policy. “Different opinions are expressed and I make a decisive and final decision — it is a very simple process.”

But apparently Bolton was too eager to offer “different opinions,” including on Iran, where his bellicosity ran up against both the president’s on-again, off-again reluctance to use military force and his penchant for spontaneous personal diplomacy.

Trump, to put it charitably, has sent mixed signals about Iran. Following through on campaign rhetoric about “the worst deal ever negotiated,” he repudiated the 2015 international agreement that placed limits on Iran’s nuclear program and has pursued a policy of “maximum pressure” on the Islamic Republic through economic sanctions. The result of that policy has been a fissure with the United States’ European allies and statements by Iran that it feels free not to comply with parts of the agreement.

But Trump also has expressed interest in a “no hard feelings” approach to Iran reminiscent of his courtship of North Korea’s Kim Jong Un. In May, amid tensions over fears in Washington that Iran might attack U.S. forces in Iraq and the Persian Gulf, the president said: “What I’d like to see with Iran, I’d like to see them call me,” adding: “We can make a deal, a fair deal … . We’re not looking to hurt Iran.”

So, should critics who worry about escalating tensions with Iran welcome Bolton’s departure? Does his firing presage a shift away from a hard line toward Tehran to a more nuanced policy?

Not necessarily. Secretary of State Michael R. Pompeo, who apparently remains in Trump’s good graces, is also a hawk on Iran. Trump arguably broke with Pompeo as well as with Bolton when he asked Iranian leaders to “call me.”

Moreover, like other presidents, Trump feels free to overrule even advisors he is happy to keep on board. The difference is that when he makes what he calls “a decisive and final decision,” he often isn’t operating on the basis of serious reflection or expert information. (Think not only of Iran policy but of Trump’s seeming skepticism about the intelligence community’s assessment that Russia interfered in the 2016 election.)

That combination of carelessness and capriciousness will continue to haunt U.S. foreign policy regardless of who replaces Bolton.