Journalism is not for the faint of heart, especially in an era where the most powerful politician in the land has labeled its practitioners “enemies of the people” who produce “fake news.” 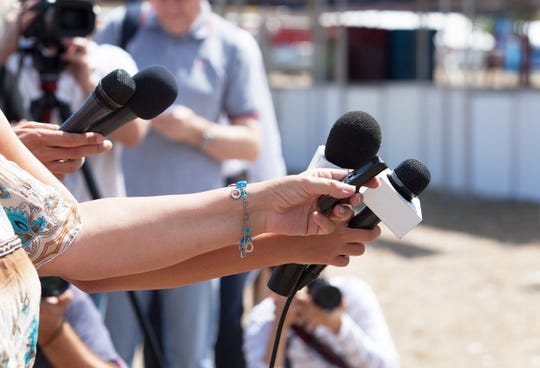 Journalism is not for the faint of heart, especially in an era where the most powerful politician in the land has labeled its practitioners “enemies of the people” who produce “fake news.”

So while we rake muck and speak truth to power without fear or favor — or at least aspire to do so — it’s only natural to sometimes lose sight of why what we do matters. I’ve blessedly been reminded by, first, a gathering of several thousand journalists that I attended in Florida a few weeks ago and, currently, the start of a new academic year that brings a fresh bunch of young people still eager to seek truth and tell stories.

My batteries have been recharged and I’m rarin’ to go.

Sometimes we become so focused on the insanity emanating from that other Pennsylvania Avenue that we forget that our work is much more than responding to tweets and temper tantrums. We have a constitutional license to inform and educate.

In the aftermath of the latest confrontation between neo-Nazis and those who have been deemed anti-fascists or, antifa, I saw one guy asserting that white people made this country. Obviously, schooling failed him. But I firmly believe that we soldiers without swords — to borrow a phrase from the documentary filmmaker Stanley Nelson — can fill in the knowledge gap of his ilk. Start with a magnificent opus by the New York Times, The 1619 Project. That long overdue corrective will absolutely alter the minds of anyone not too far gone to learn. The collection of essays and commissioned literary works challenges readers to unlearn what they think they know about the country’s origins and to recognize the centrality of the African/African American presence.

This month marks the 400th anniversary of the arrival in the Virginia colony of Africans kidnapped from present-day Angola. Commemoration events will culminate on Sunday with a National Day of Healing and the ringing of bells across the country at 3 p.m. That’s a fine goal, but healing won’t come until there is acknowledgement of how the past has shaped the present. And we journalists have a role in helping the general public connect the dots.

We must also educate about politics in a way that makes us more than commentators in a sporting event or producers of spectacles called presidential debates. At the convention of the National Association of Black Journalists (NABJ), which drew some 4,000 people, I challenged political reporters to tell more complex truths than they are wont to do. Yes, the middle class feels pinched. But why must the faces of middle-class angst be white? And in those rustbelt counties that have defected from the Democratic Party because of the impact of globalization, aren’t there more than white people who live there and have been similarly displaced?

The more complex truth is that most issues on the minds of the American populace are on the minds of more than angry white men or exasperated white soccer moms. So we must tell it like it is, taking advantage of new tools for unearthing truth, telling stories and connecting with our communities, as well as new initiatives to support local news and investigative journalism. Learning about this during workshops at conventions such as NABJ’s is part of the continuing education of journalists.

The good news is that many journalists I met at the convention are amenable to the idea of more complex truth; the bad news is that too many others said that as the only person of color in their news shops or one of a handful, they have limited opportunities to shape news coverage. That is an industry failure.

Thankfully, despite all the challenges — from the prohibitive cost of earning a degree in the more elite journalism programs to an anti-truth mood being stoked by political charlatans — young people are filling classrooms from coast to coast.

I’m all fired up now, but when my batteries finally lose their power, there’s an army of replacements ready to take up the role that the fictional Mr. Dooly ascribed to journalists: “comfort the afflicted and afflict the comfortable.”

— E.R. Shipp, a Pulitzer Prize winner for commentary, is the journalist in residence at Morgan State University’s School of Global Journalism and Communication.