Here are two facts Americans should be aware of: There will be men and women deploying to Afghanistan for the first time this September who were born after Sept. 11, 2001; the authorization for that war was signed so long ago that 80% of the men and women in Congress today never voted on it. 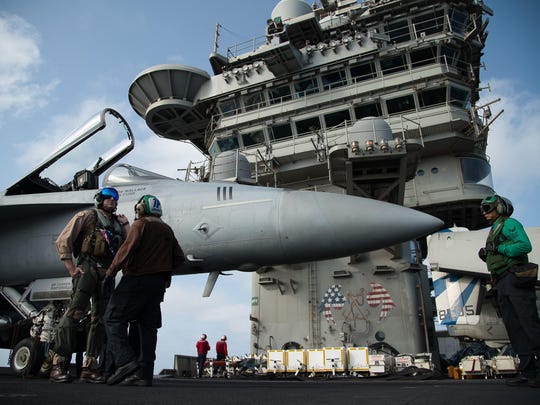 FILE - In this June 3, 2019 file photo, a pilot speaks to a crew member by an F/A-18 fighter jet on the deck of the USS Abraham Lincoln aircraft carrier in the Arabian Sea. As Iran prepares to break through limits set by its 2015 nuclear deal with world powers, each step narrows the time its leaders would need to have enough highly enriched uranium for an atomic bomb -- if they chose to build one. By Thursday, June 27, 2019, Iran says it will have over 300 kilograms of low-enriched uranium in its possession, which would mean it had broken out of the atomic accord. (AP Photo/Jon Gambrell, File) (Photo: Jon Gambrell / AP)

Here are two facts Americans should be aware of: There will be men and women deploying to Afghanistan for the first time this September who were born after Sept. 11, 2001; the authorization for that war was signed so long ago that 80% of the men and women in Congress today never voted on it. Put these facts together and one comes to the inescapable conclusion that Congress is overdue in revisiting and updating the legal foundations on which the war in Afghanistan is based.

I’m not opposed to war in principle. I enlisted in the Army, volunteered to lead men and women into combat, and fought in Afghanistan. But if the president of the United States believes there is a threat to our national security that requires sustained military action, then he or she should be forced to seek approval from Congress. This isn’t a matter of opinion, it’s the Constitution. This is exactly what happened in 2001. President George W. Bush asked to wage war against the terrorists behind the 9/11 attacks. Congress passed the Authorization for Use of Military Force, or AUMF.

But that was 18 years ago. And since then, Congress has abdicated its responsibility as Democratic and Republican presidents alike have invoked the AUMF against targets across 19 countries, many of which have no actual ties to al-Qaeda or affiliated groups.

More: EU works to save collapsing nuclear agreement with Iran

This concern has taken on a new urgency. As tensions with Iran continue to escalate, Washington is embroiled in a debate about whether the 2001 AUMF provides a legal basis for war with Iran. That this is even a question underscores the need for Congress to take a fresh look at the AUMF. Until then, war hawks and neoconservatives will be trying to stretch an authorization older than our youngest soldiers.

Let me be clear, Iran is a serious threat and bad actor. I’ve had friends wounded by Iranian-made armor-piercing explosives in Iraq. Iran has continually undermined American interests in the Middle East, including attacking tankers and the recent downing of one of our drones. But that doesn’t mean its actions fall under the legal authority granted in the 2001 AUMF. An updated, modernized authorization can balance our need for national security with our expectation of proper oversight and transparency. I’m a Democrat representing one of the tightest swing districts in the country, but this isn’t partisan. The forever wars have gone on for a generation now, enabled by politicians who have been too afraid to vote on war and peace.

My colleagues are coming to a similar realization. In June, the House voted to repeal the 2001 AUMF in eight months — giving Congress plenty of time to develop a replacement. And last week, the House passed an amendment as part of the annual defense bill that would prevent a war with Iran without congressional authority. As the House and Senate prepare to enter into a conference committee to hash out differences in their respective defense bills, the situation is clear: The House is in favor of repealing the AUMF and installing safeguards against war with Iran, while the Senate prefers to keep the status quo. I urge all members to see to it that AUMF repeal remains a core component of the final bill.

Anything less would fall short of one of our most solemn duties under the Constitution: our duty to declare war.

— Max Rose represents Staten Island and South Brooklyn in the U.S. House of Representatives and serves on the Veterans’ Affairs and Homeland Security committees. An Army combat veteran, he currently serves in the National Guard.