OP-ED: Mourning Justice Stevens — and the process that put him on Supreme Court

Obituaries for retired Supreme Court Justice John Paul Stevens are reminding us that there was a time — several times, in fact — when presidents chose nominees for the high court on the basis of professional qualifications, not ideology, and those nominees were confirmed by the Senate with bipartisa

OP-ED: Mourning Justice Stevens — and the process that put him on Supreme Court 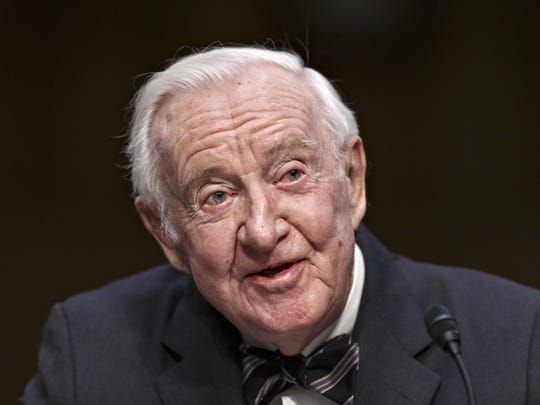 FILE - In this April 30, 2014, file photo, retired Supreme Court Justice John Paul Stevens testifies on the ever-increasing amount of money spent on elections as he appears before the Senate Rules Committee on Capitol Hill in Washington. Stevens is calling for the repeal of the Second Amendment to allow for significant gun control legislation. The 97-year-old Stevens says in an essay on The New York Times website that repeal would weaken the National Rifle Association's ability to "block constructive gun control legislation." (AP Photo) (Photo: AP)

Obituaries for retired Supreme Court Justice John Paul Stevens are reminding us that there was a time — several times, in fact — when presidents chose nominees for the high court on the basis of professional qualifications, not ideology, and those nominees were confirmed by the Senate with bipartisan support.

Stevens’ nomination by President Ford in 1975 came at an unusual juncture in American politics. Ford had succeeded Richard M. Nixon, whose first attorney general, John N. Mitchell, had been caught up in the Watergate scandal. (Mitchell was convicted and served time in prison.)

Ford, who had an interest in demonstrating that his Justice Department wasn’t a political operation, appointed Edward H. Levi, a legal scholar and former president of the University of Chicago, as attorney general. Levi in turn recommended Stevens, a fellow Chicagoan serving on the 7th U.S. Circuit Court of Appeals. Stevens was confirmed by the Senate on a 98-0 vote.

Obituary writers are emphasizing that Stevens, originally regarded as a moderate conservative, eventually became the leader of the court’s liberal wing. He thus enacted what a lot of observers see as the ideal trajectory: A justice is appointed on a basis other than ideology and then demonstrates independence by not voting predictably in favor of an agenda associated with the party of the president who appointed him or her. The salutary result is that the court is viewed as being above partisan politics.

Sometimes, as with Stevens, the non-ideological factor driving an appointment is credentials, but it also can be diversity: President Eisenhower appointed William J. Brennan in part because Brennan was Roman Catholic. When President Reagan named Sandra Day O’Connor to the court, he was fulfilling a campaign promise to name the first female justice.

But those days are gone, which may account for the hint of nostalgia in the obituaries for Stevens. Supreme Court nominations (especially those picked by Republican presidents) are increasingly driven by ideology, and it had become common for senators to vote against nominees of the other party even before Sen. Mitch McConnell angered Democrats by blocking President Obama’s nomination of Judge Merrick Garland to succeed the late Justice Antonin Scalia.

Chief Justice John G. Roberts lamented this trend in 2016, shortly before the death of Scalia. “Look at my more recent colleagues, all extremely well-qualified for the court, and the votes were, I think, strictly on party lines for the last three of them, or close to it, and that doesn’t make any sense,” Roberts said in remarks to the New England School of Law. “That suggests to me that the process is being used for something other than ensuring the qualifications of the nominees.”

Given the partisanship that has infected Supreme Court appointments, it’s probably unrealistic to expect a return to an emphasis on credentials in choosing justices or the sort of bipartisan support Stevens (and the much more ideological Scalia) received in the Senate.

The fact that justices can serve for decades also raises the political stakes. (Stevens retired in 2010 after 34 years on the court.) That explains why there is growing support for the idea of fixed terms for justices, perhaps 18 years. That would reduce the importance of any one nomination.

What does seem clear is that there will be no return to the sort of process that produced Stevens’ nomination and distinguished career. That is also a cause for mourning.