On a good day, I’m almost fluent in Chinese. I pepper my sentences with English “so’s” and “likes” as well as the occasional hand flourish when I attempt to shape my thoughts in midair. 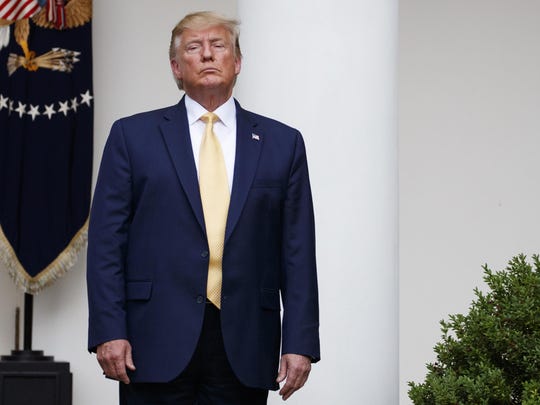 President Donald Trump stands during an event about the census in the Rose Garden at the White House in Washington, Thursday, July 11, 2019. (AP Photo/Carolyn Kaster) (Photo: Carolyn Kaster / AP)

On a good day, I’m almost fluent in Chinese. I pepper my sentences with English “so’s” and “likes” as well as the occasional hand flourish when I attempt to shape my thoughts in midair.

Early on, my father impressed on me the importance of learning the language. It would become the foundation of my relationships with family; Chinese allows my grandmother to be at ease as she asks me to set the table or tells me about how fresh the lychees were at the market this morning. For this reason, I spent most of my summers in Taipei, strolling through night markets bathed in neon lights and eating at the chuabing shop that my father frequented in college, before he emigrated, before his American-born daughter was even imagined.

Last summer, I spent two months in Beijing perfecting my Chinese, polishing off the rough edges until it sank into my hand like a smooth pebble. Tensions between China and the U.S. tightened. My father’s desire for me to learn Chinese darkened with a splash of worry.

“You might need it one day. If there comes a day when America rejects you, you can go back.”

President Trump’s weekend tweets admonishing four minority members of Congress to “go back” to their “broken” countries revive an old narrative, one that has been employed since the Chinese Exclusion Act, in 1882, that echoed in the Immigration Act of 1924 and again in the ban on citizens of Muslim-majority countries in 2017.

It is a narrative that discredits immigrants and their children solely because of the color of their skin or the cultural ties they struggle to keep alive. It believes that immigrants’ love is divided, that they only have half of their hearts left to offer this new home of theirs, that they love this place less than their white counterparts.

What those people forget is that the highest form of love is built on sacrifice.

Immigrants and people of color actively choose to be American over and over again, even when this country tramples their humanity and disputes how genuine their intentions are.

It is an overwhelming love for this country that kept my parents renting a rundown room in Denton, Texas, for $175 a month, spreading out a $2 bag of chicken thighs over a week’s worth of meals because it was all they could afford.

My mother might have had a better life if she had gone back to “her country.” She wouldn’t have been denied deserved promotions because English is her second language; she wouldn’t be half a world away from her four siblings.

To this day, my father yearns for the informality and comfort of his friendships in Taiwan. Instead, he settles for Sunday mornings in majority-white churches, with people who treat him as if it’s his first time there, Sunday after Sunday.

I’ve heard too many stories of doctors who become janitors, professors who become factory workers to believe that immigrants love this country less, that they believe in it less than everyone else.

I have chosen to believe in the America that exists in the imagination of immigrants, the America that draws them here despite oceans and borders and conditional love. But I don’t take that version for granted.

On a good day, my mother is almost fluent in Chinese. I can tell that she has slowly forgotten the shape of certain Chinese characters, that she is frustrated by her inability to remember and my father’s inability to aid her. My greatest fear is that America will allow its very self to be subsumed by xenophobia and racism, that it will force them an ocean away from me as waves of tension with China swell. After all, this is no longer a country that is afraid of separating families.

Until then, I will fight for a nation that sees its 45 million immigrants for what they are — Americans with hearts large enough to love two countries, to call both places their own.

— Katherine Hu is a student at Yale College majoring in history. She serves as an Opinion editor for the Yale Daily News.