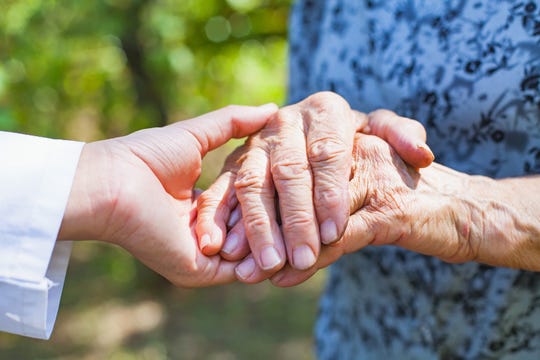 I saw her as often as I could while I lived in Ohio. Finally, I moved back to Baltimore, where my parents lived, and enjoyed their company at least twice a week in a nearby retirement community. I never sensed they were aging; I saw them every couple of days and they always seemed the same to me.

But eventually, and inevitably, things changed, despite my mother’s promise. In January 2017, my mother had a few falls, breathing troubles and other ailments. I was working at the time, and when I was alone in the car, traveling to and from my parents’ apartment, the care center, the hospital, I remember vividly thinking that if my mother dies, I will simply not be able to stand it. I’d actually get short of breath, my heart would almost beat out of my chest and tears would run down my face.

Finally, she was in hospice and I came to realize that she might just break that promise. She was a trouper during the process. She knew what was happening, although I continued to deny it, and once even asked “how long is this going to take?” after she was surprised to wake up in the middle of the night.

If she dies, I thought, will I feel betrayed by her promise — the one I clung to so childishly? Soon it wasn’t a question of “if,” so much as “when.” On Feb. 20, 2017, my mother passed away in her hospice bed while I held her hand. It was quieter than I thought, less dramatic than I anticipated: She opened her eyes and quickly closed them, and then she was gone. For a few days, I was sort of paralyzed in my grief. I cried; I received calls and visits; we did the funeral and reception exactly as we’d promised (and as she had prescribed).

And then life went on for my father, my family and everyone else. But my mother’s promise? Not really broken: I see her every day in the things she’s given me and the traits I inherited from her. I hear her every day in my own voice and my sister’s. I smell her in her favorite perfume on my vanity. And sometimes, I even feel her brush by me, touch my face or come in a happy dream that makes me smile when I wake up from it.

I guess, after all, she kept her promise, just not the way I thought, but she kept it all the same.

— Margaret Collier is a retired human resources professional. She wrote this for the Baltimore Sun.