OP-ED: What is Trump’s true base?

What is the president’s real base? And will it be sufficiently motivated to deliver Trump a second term?

OP-ED: What is Trump’s true base? 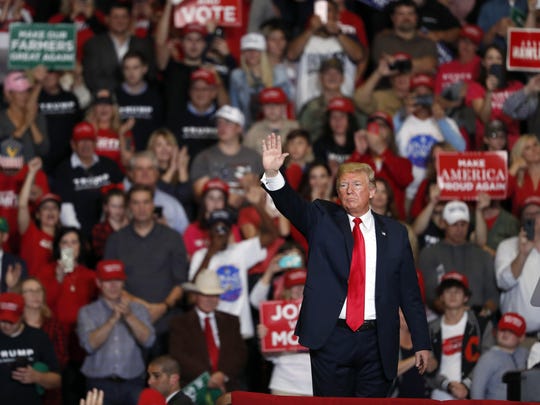 President Donald Trump waves to the crowd as he leaves the stage at the end of a campaign rally Monday, Nov. 5, 2018, in Cape Girardeau, Mo. (AP Photo/Jeff Roberson) (Photo: Jeff Roberson / AP)

President Trump’s political strategy is completely clear: use his persistent promotion of a border wall to energize his core supporters. His campaign manager, Brad Parscale, told Fox News that “border security” is the “No. 1 reason” those ardent advocates will vote to re-elect him. Trump himself tweeted as the partial government shutdown began, “We have the issue, Border Security, 2020!”

Are Trump and Parscale correct? What is the president’s real base? And will it be sufficiently motivated to deliver Trump a second term?

We calculate that Trump’s true base is about 37 percent, far from the number needed to win — unless a third-party candidate divides the vote. But Trump has defied conventional wisdom before and could again. Anybody who thinks he’s fatally weakened is not paying attention.

All votes and all voters are not equal in politics. Intensity matters — a lot. And Trump’s ability to maximize the loyalty of his supporters is the biggest variable in next year’s campaign.

More: OP-ED: How did we get to place where FBI wondered if American president was Russian asset?

Still, the numbers today are daunting for Team Trump. In 2016, he won 46 percent of the vote, but 1 out of 5 of his supporters consistently expressed doubts about his temperament and trustworthiness. They voted for him anyway, mainly because they feared and despised Hillary Clinton.

But an ongoing study of Trump supporters by the Pew Research Center concludes that 1 in 5 — the same percentage that had doubts in 2016 — has grown disaffected since he took office. Subtract those disillusioned voters, or 9 percent, from his total of 46 percent and you get 37 percent remaining as unwavering Trumpists.

Another telling metric: A recent Pew poll asked if Trump “cares about people like me.” The answer: 36 percent said yes. A Wall Street Journal/NBC survey last month asked voters if they would “definitely” or “probably” back Trump next year. The combined total was 38 percent, compared to 52 percent likely to choose a Democratic challenger. Monmouth University asked in November whether Trump “deserves to be re-elected,” and 36 percent said yes, with 59 percent saying it’s “time for someone else.”

The uneasiness in Republican ranks was only reinforced by the midterm elections. Take voters under 25. Sixty-eight percent backed Democratic candidates, a sharp increase from two years before, when only 56 percent of that cohort voted Democratic. Among white voters, the Democratic share jumped 7 points, from 37 percent to 44 percent.

So why are Trump and his campaign manager sounding so confident? Start with the obvious fact — they’ve won before. But a bigger reason is the almost fanatical devotion of their True Believers, even if that’s only 37 percent of the country.

Political analyst Ron Brownstein has unearthed a telling statistic from the 2016 exit polls. Yes, only 41 percent supported Trump’s border wall while 54 percent opposed it. “Yet Trump,” he writes in The Atlantic, “won a much higher share of the wall’s supporters (85 percent) than Hillary Clinton did of the wall’s opponents (76 percent).

“From the start of his presidential campaign, immigration, more than any other issue, captured the potential benefits of Trump’s strategy of pursuing depth of support over breadth,” writes Brownstein.

Along with intensity, the other key word for Trump is “organization,” harnessing and exploiting that fervor for maximum value. That’s why Trump started his re-election campaign the day he took office, Parscale told Fox, and will have spent close to a billion dollars by Election Day. Much of that money will be devoted to a “much larger ground game,” than in 2016, he explained. “We need to find every person who might vote for the president and find them now.”

“We’re already fighting now, we’re already building, and we’re almost two years out,” he boasts. Trump’s Democratic opponent cannot start organizing at the same level until the summer of 2020 and is “going to have a long way to catch up with us.”

No matter how you spin it, 37 percent is not a majority. But the devotion of Trump voters and the efficiency of his organization make the outcome far from certain.

— Steve and Cokie Roberts can be contacted by email at stevecokie@gmail.com. This column was distributed by Andrews McNeel Syndicate.