The federal government remains in a partial shutdown as President Donald Trump digs in his heels (good thing those bone spurs got better) over his silly wall, refusing to agree to a spending bill that doesn’t include $5.7 billion for what assuredly would be a waste of tax dollars. 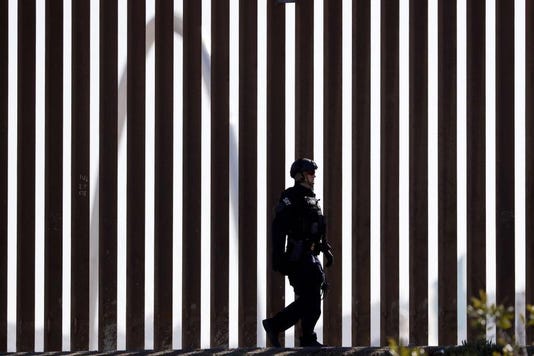 A U.S. Customs and Border Protection Special Response Team officer walks along a border wall, as the Monumental Arch in Tijuana, Mexico, sits behind, Sunday, Nov. 25, 2018, in San Diego. Migrants approaching the U.S. border from Mexico were enveloped with tear gas Sunday after a few tried to breach the fence separating the two countries. (AP Photo/Gregory Bull)(Photo: Gregory Bull, AP)

The federal government remains in a partial shutdown as President Donald Trump digs in his heels (good thing those bone spurs got better) over his silly wall, refusing to agree to a spending bill that doesn’t include $5.7 billion for what assuredly would be a waste of tax dollars.

At some point, one of the few adults left at 1600 Pennsylvania Avenue needs to explain to the president the difference between compromise and capitulation.

And yes, the Senate Democrats are holding firm, too, in their opposition to the wall. The difference, though, is the Democrats recognize the folly in Trump’s obsession, one that the president re-embraced Thursday afternoon in a public statement that makes a pretzel of the truth about the border and public safety.

“The president has made clear that any bill to fund the government must adequately fund border security to stop the flow of illegal drugs, criminals, MS-13 gang members, child smugglers and human traffickers into our communities — and protect the American people,” the White House said, adding: “The administration understands this crisis and made a reasonable, common-sense solution to Democrats five days ago — we've not received a single response.”

But the administration clearly doesn’t understand “this crisis,” because it doesn’t exist.

Illegal immigration is at its lowest level in a decade. Young families are arriving at the border in larger numbers — while still constituting a sliver of the overall flow of migrants — but a wall built at some point in the future won’t do anything to fix that. (To its credit, the administration has made small yet positive steps to invest more in Central American governments and economies.)

More: OPED: When professionals sell out, we get a president like Trump

The vast majority of drugs and other contraband smuggled into the country come through ports of entry, or via tunnels dug under existing walls and fences. Covering more border with a wall — or making it 30 feet tall, as the president wants — doesn’t address either of those smuggling routes.

The reality of the situation — which Trump eschews with reckless abandon — is that most people living in the U.S. without legal status enter the country with permission, and then don’t leave. Not much role for a wall there, either. Do some walk across? Certainly — and then often give themselves up to border agents and seek asylum.

And regardless of their status, immigrants commit crimes at lower rates than native-born Americans.

The president also sought to portray his decision to stay in Washington over Christmas as an effort to work with Democrats in the Senate (he will need seven Democratic or independent votes in the next Senate to get money for his wall into the bill funding government operations for the rest of the fiscal year). Trump, the White House said, is “hoping to negotiate a deal that would stop the dangerous crisis on the border, protect American communities, and reopen the government. The Democrats decided to go home.”

Yes, most did — because the Republicans adjourned both the House and the Senate. That wasn’t a decision by the Democrats.

And it’s pretty certain that if Trump picked up the phone on Christmas Day — or even right now — to tell congressional leaders of both parties that he had come to his senses and would sign a bill reopening the government without funding for the wall, they’d take the call.