OPED: A history of inaction toward pedophiles

Before The Baltimore Sun moved offices last month, we were told we had to pare down what was in many cases years of accumulated notes and files — drawers full of interviews, court records, gang manifestos and w

OPED: A history of inaction toward pedophiles 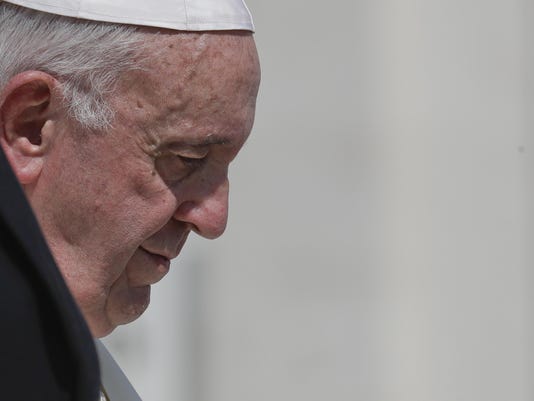 Pope Francis leaves after his weekly general audience, at the Vatican, Wednesday, Aug. 29, 2018. Pope Francis lamented Wednesday how Irish church authorities failed to respond to the crimes of sexual abuse, speaking during his first public appearance at the Vatican after bombshell accusations that he himself covered up for an American cardinal's misdeeds. (AP Photo/Andrew Medichini)(Photo: Andrew Medichini / AP)

Before The Baltimore Sun moved offices last month, we were told we had to pare down what was in many cases years of accumulated notes and files — drawers full of interviews, court records, gang manifestos and whatever else we’d managed to collect and save in case we might need it again for another story, another day.

I chucked two decades worth of papers to get to the goal: bringing a single box. Inside, along with personal items and performance evaluations, I put two large, white binders, each several inches thick — files from the only story I was certain wasn’t over.

They contain much of what I know about John Merzbacher, the child rapist accused of terrorizing dozens of Catholic students in Baltimore in the 1970s. The church turned its back on those children when it was happening, and again, in many ways, in the 1990s, after several of them gathered the courage to come forward as adults, in court, ultimately condemning Mr. Merzbacher to multiple life sentences in prison.

Now, state authorities are investigating how the Archdiocese of Baltimore has handled allegations of sexual abuse made against its representatives through the decades, spurred by a Pennsylvania grand jury report last month that identified more than 300 “predator priests” in that state. Baltimore’s current archbishop, William E. Lori, says officials are supportive of the effort and plan to cooperate.

Nothing against Archbishop Lori — who came to Baltimore in 2012, long after Mr. Merzbacher was incarcerated — but I’m less than convinced.

In 2012, when I was a courts reporter and it looked like Mr. Merzbacher was going to get out of prison on a technicality (he didn’t), I interviewed more than two dozen former students of the Catholic Community School in Locust Point, where he taught English, and pored over hundreds of pages of old civil and criminal court documents. They told a story of sheer hell: middle school students beaten, manipulated, violated and scared into silence daily by a sadistic pedophile who moved freely among them without intervention.

Catholic officials – one nun in particular, Eileen Weisman – either witnessed or were told about more than a half dozen incidents as they occurred: Mr. Merzbacher in a boiler room alone with a boy; Mr. Merzbacher in a locked room with a screaming girl whose chest was exposed; Mr. Merzbacher unclasping a girl’s bra; Mr. Merzbacher with a child in his lap, her underpants around her ankles; Mr. Merzbacher choking, punching and kicking a male student in the hall. And yet, teach on he did. For years.

Mr. Merzbacher was briefly put on leave after concerns were raised about him by another teacher – who was coincidentally fired on the same day Mr. Merzbacher was reinstated to his position via letter from an archdiocese lawyer.

For the next 14 years, Elizabeth Murphy, Mr. Merzbacher’s student from 1972 to 1975, would report her own abuse to church officials, including Ms. Weisman, on at least four separate occasions. It’s only after she reached out to a lawyer in 1993 that prosecutors were notified.

Mr. Merzbacher was ultimately charged with more than 100 crimes, accused of raping and sodomizing students and forcing them to have sex with one another under threat of death from the gun he frequently flashed; he was convicted of rape and sexual abuse in the first, and therefore only, case against him to go to trial: Ms. Murphy’s.

During the 1995 trial, the archdiocese professed to support the named victims and eventually paid most of them in confidential settlements that took away their right to sue certain parties – including Mr. Merzbacher and Ms. Weisman, who continued to work for the archdiocese post trial.

The chair of the archdiocese’s independent review board told me that he and others knew of Ms. Weisman’s alleged role in allowing the abuse to continue “while the trial was going on, but decided that was not the time to take disciplinary action” against her. “And then after that, it just slipped between the cracks.”

She was forced to retire in 2002 and barred from holding “any position within the archdiocese that involves overseeing the safety of children,” a spokesman said.

Yet, somehow, a children’s garden at the Cathedral School was dedicated to her after that.

This is the legacy Archbishop Lori inherited.

Drug addiction, depression, self-loathing — that’s what many of Mr. Merzbacher’s students were left with, those who survived, anyway. At least three suffered early, tragic deaths. They lost their childhood and their church.

I hope the archbishop keeps them in the forefront of his mind as the investigation unfolds. The life sentence Mr. Merzbacher is serving is nothing compared to the one they and their families endure.