Doubling down again on its hostility toward immigrants, the Trump administration has proposed denying permanent residency to anyone who receives more than a modest amount of assistance from public benefit progr 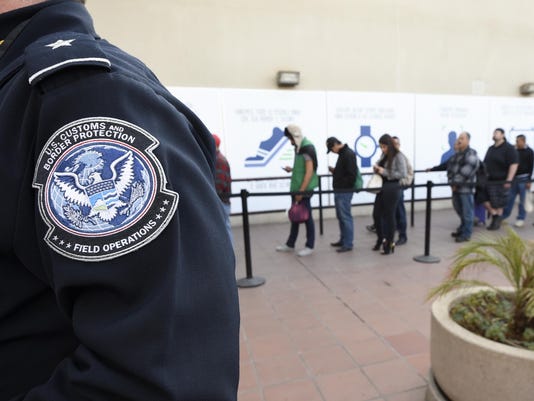 FILE - In this Dec. 10, 2015, file photo, pedestrians crossing from Mexico into the United States at the Otay Mesa Port of Entry wait in line in San Diego. The Trump administration is proposing rules that could deny green cards to immigrants if they use Medicaid, food stamps, housing vouchers and other forms of public assistance. The Department of Homeland Security said Saturday, Sept. 22, 2018, that current and past receipt of certain public benefits above thresholds will be considered "a heavily weighed negative factor" in granting green cards as well as temporary visas. (AP Photo/Denis Poroy, File)(Photo: Denis Poroy / AP)

Doubling down again on its hostility toward immigrants, the Trump administration has proposed denying permanent residency to anyone who receives more than a modest amount of assistance from public benefit programs.

If immigrants use a Section 8 housing voucher or buy groceries with SNAP, this revised regulation could label that person a “public charge” — a dependent on the government — and the Department of Homeland Security could deny her or him a green card. Further, if an immigrant left the United States for an extended period (perhaps to care for an ailing parent), the public charge label could also result in being permanently denied reentry.

This proposal is, in equal parts, completely pointless, flagrantly illegal and startlingly cruel. Like our budding trade war with Canada, this is the administration responding to a problem that does not exist. The White House apparently wants to conjure the image of hordes of listless immigrants flocking to our shores to cash in on our public benefits. No such hordes exist. Immigrants consistently work more on average than native-born Americans, albeit often at very low wages.

Large numbers of legal immigrants, as well as all immigrants in the United States illegally, are statutorily ineligible for most major public benefit programs. That includes cash assistance (welfare), the Supplemental Nutrition Assistance Program (SNAP, formerly food stamps), and non-emergency Medicaid. The few exemptions are generally given to immigrants with clear reasons for being unable to support themselves, such as injured torture survivors, or those with demonstrated commitments to working, such as U.S. veterans or those who can claim 40 quarters of work. Anyone who wants to migrate to take advantage of a nation’s public benefits scratched the United States off their list long ago.

Further, this new rule doesn’t even focus on immigrants who are, in fact, failing to support themselves. Instead it would slap the public charge label on an immigrant who receives public benefits valued at more than 15 percent of the federal poverty line (for one person, that annual limit in 2018 would be $1,821). Nobody can get by on $152 per month. The immigrants the administration is targeting are, like tens of millions of U.S. citizens, working hard to support themselves, but unable to afford basic necessities on low wages.

The proposed rule so brazenly disregards federal law that it is difficult to imagine how the agency could defend it. Among other things, it counts SNAP’s food benefits toward this new cap on financial benefits. Yet the Food and Nutrition Act, which authorizes SNAP, provides in section 8(b) that “the value of benefits that may be provided under this act shall not be considered income or resources for any purpose under any federal, state or local laws, including, but not limited to, laws relating to taxation, welfare and public assistance programs.” This regulation is doing precisely what the statute prohibits.

The text of the proposed regulation seems to revel in the hardship it would impose on immigrants and their families. It anticipates legal immigrants will use $2.27 billion less in assistance each year. These are not generous benefits to begin with; this country’s safety net programs are parsimonious relative even to those in substantially poorer nations. If immigrants in the United States qualify for these benefits, it is because they will suffer great hardship without the help.

Because Congress has refused to maintain a reasonable federal minimum wage — it has been stuck at $7.25 an hour since 2009 — a full-time, year-round minimum wage worker trying to support a family is well below the poverty line. Defenders of the current minimum wage insist that such a worker can escape poverty by supplementing those earnings with subsistence benefits such as SNAP. Yet it is precisely those benefits that the administration is trying to force immigrants to give up.

Moreover, the $2.27 billion annual savings estimate is almost certainly low. Already the mere threat of a reduced chance at a future green card is having a broad chilling effect. Agencies that provide food and prenatal healthcare — services that aren’t even in the scope of the new rule — report that pregnant women are declining to enroll or dropping out for fear of being deemed a public charge. This inevitably threatens the well-being of the children they are carrying, who will be native-born American citizens.

Last spring, the Trump administration ripped children away from their immigrant parents at the southern border to dissuade others from coming here. Now it is using the green card process to drive immigrants away from benefits they need and are entitled to. The details are different, but the underlying thinking is the same: Make immigrants suffer.

— David A. Super is a law professor at Georgetown University.