OP-ED: Why are states chasing away robot dogs?

Sony recently re-released an updated version of aibo, the robotic dog it sold from 1999 to 2006. The “canine” is built and designed for companionship, using artificial intelligence to remember different people.

OP-ED: Why are states chasing away robot dogs? 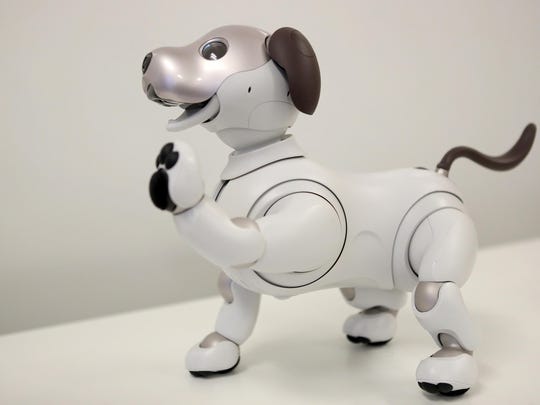 Sony recently re-released an updated version of aibo, the robotic dog it sold from 1999 to 2006. The “canine” is built and designed for companionship, using artificial intelligence to remember different people. It also recognizes how they react to its behavior, enabling it to respond based on what makes them happy.

While this may never replace the warmth of true puppy love, it’s just the latest example of how technology is creating new options for consumers. Those who are physically unable to care for or be around a dog can now have an (albeit limited) alternative. Similar products are even being used to provide comfort to dementia patients. In aibo’s case, there’s just one catch: Depending on what state you’re in, you may not be able to buy one.

As CNET recently documented, nearly 13 million Americans are prohibited from purchasing aibo. Why? “Due to state regulations and policies,” Sony’s website explains, “the aibo robotic companion is not for sale or use in Illinois.” As a result, citizens in America’s sixth most populous state can’t even consider buying the product.

Sony is referring to Illinois’ Biometric Information Privacy Act (BIPA), which regulates the collection and use of biometric information. This includes such things as eye scans, finger or palm prints, voice recognition, hand or face geometry, and facial imaging. Because aibo collects and processes faces in order to both recognize people and respond to their reactions, it created a compliance issue that Sony (a company worth $53 billion) has decided is too expensive to incur.

Sony isn’t alone in deciding the cost of complying with BIPA is too much. Alphabet, the $800 billion parent company of Google, has also decided that reaching consumers in Illinois is not worth the cost. Nest, Alphabet’s smart home company, has turned off its smart camera service there. This product allows homeowners to identify friends or strangers approaching by using facial recognition. Google Art, an app that matched your selfie with great works of art that resembled you, was also unavailable to users in Illinois.

It’s not just the big, blue states. Illinois’ law, which was passed in 2008, has been introduced in a number of states, from Florida to Montana, recently in response to headline-grabbing data privacy scandals. Montana’s, for example, is a nearly carbon-copied version of Illinois’ BIPA.

While a biometric privacy law could potentially increase consumer privacy, there are also real drawbacks–beyond losing out on robotic dogs–to consider. We don’t have to speculate about the law’s impacts. Montana’s future can be found in Chicago.

Companies like Google, Snapchat, and Facebook have been tied up in Illinois courts for years fighting accusations that their products violate BIPA. Facebook, for example, could be facing billions of dollars in damages under the law. Montana’s version of the law is even more expansive than Illinois’ by including almost anything, from a person’s eyes, fingerprints, voice, face, gait, DNA or any other “physical identifier,” which remains undefined. It is nearly impossible to know what this will mean in practice and would likely require years in court hashing out how each of these items should be defined and treated under the law.

At the end of the day, putting roadblocks in the way of innovations, which, while sometimes messy, are changing lives for the better overall should not come without deep consideration. And as biometrics become more available, their uses will become more prevalent and the uses go far beyond robot dogs and selfie apps. Facial recognition software, for example, can be used to identify when a driver is falling asleep to either alert them or initiate auto-pilot.

If companies are already refusing to business in one of the most populous states, there is little reason to doubt that the next generation of technology will simply skip over a much-smaller state like Montana, with a population half the size of the city of Chicago. This means that potentially life-saving technology will be unavailable to large parts of the country.

There are legitimate privacy concerns that policymakers must tackle, and neither Illinois nor Montana is alone in looking for solutions. A number of other states, including Florida and Michigan, are following Illinois’ lead. But we can learn one thing from Illinois’ experience: There are better places to look for the right approach.