For whatever reason, Pennsylvania's elected class have shown no interest in holding those responsible for the opioid crisis to account. 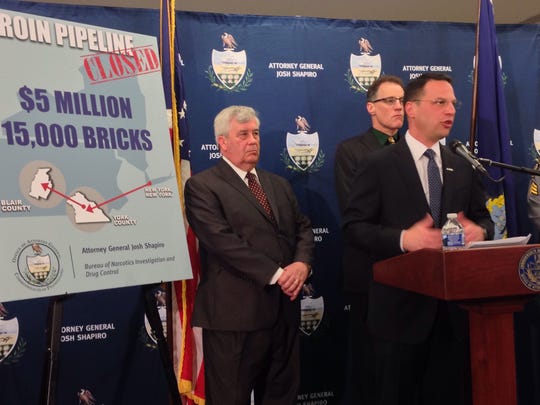 This past month, Oklahoma settled a massive lawsuit with Purdue Pharma for $270 million.

That lawsuit and numerous others "accuse the company of minimizing the addiction risk and pushing doctors to up dosages even as overdoses climbed," according to the Associated Press.

And this past week, New York's attorney general announced new litigation against several drug-makers, including Purdue and its ruling family, the Sacklers.

All of the states involved have one thing in common: They've been ravaged by opioid addiction, an epidemic that was initiated two decades ago, fed by greed and corrupt marketing.

But Pennsylvania's elected class insist on slow-walking any effort to hold those responsible accountable.

Instead, the state is pouring cash into housing dealers in state prisons and local jails. Its officials watch as overdoses strain its Medicaid system. It's dolling out overdose treatment naloxone to school children.

In December, Wolf and Shapiro were asked why Pennsylvania has yet to file a lawsuit against Purdue, especially as other heavily affected states had done so.

Wolf punted the question to Shapiro, who, in turn, defended his decision to buck the trend and continue a "robust investigation," according to The Morning Call.

To be fair, Shapiro's office is part of a 40-state probe into Purdue's pill-slinging operation. Yet, at some point, action is required, especially as an increasing number of states take the company to court.

Pennsylvania is among the hardest-hit by opioids. For every 100,000 Pennsylvania residents, 18.5 overdosed in 2016, says the National Institute of Health.

Heroin, fentanyl and, yes, Purdue's OxyContin remain a scourge on communities right here in York County. And local and state officials have no problem tossing low-level dealers in prison.

But this plague originated years ago at Purdue Pharma. The company allegedly showered physicians in gifts and incentives to prescribe its hot new painkiller. Its executives suppressed internal research that proved Oxy's highly addictive nature, according to the New York Times.

All the while, its sales and marketing teams told physicians and the public that its drug was safe.

Prescriptions flowed out of medical clinics throughout the country. Billions flowed into Purdue's coffers.

Pennsylvania's two most powerful Democrats aren't even in sync with the state's local governments.

York County is among a dozens of municipalities that have filed lawsuits against Purdue Pharma and other drug-makers. Most of the lawsuits have been consolidated in Delaware County Court.

And yet, Wolf and Shapiro refuse to hold those responsible for a state-wide epidemic responsible.

So much for leadership at the top.