Mueller's narrative could, if nothing else, arm Americans with the information to combat Russia's assault on western democracies.

Washington lawmakers on both sides of the aisle are clamoring for a quick release of the final report submitted Friday by Special Counsel Robert Mueller. York Dispatch

Watered-down Cliffs Notes won't cut it. Congress and the public must see Special Counsel Robert Mueller's report if maintaining faith in the system is of any concern.

Mueller on Friday ended months of speculation that his sweeping probe into Russian interference in the 2016 election, and whether Trump's campaign was involved in it, was coming to an end by delivering his findings to Attorney General William Barr.

The law requires only that Barr issue a report to Congress of his own, detailing Mueller's "principle conclusions." And that's all Barr would commit to earlier this year at his Senate confirmation hearing.

They expect a detailed account of evidence Mueller gathered. They want to know if any of it points to President Donald Trump, who, under Justice Department rules, is immune from indictment.

House Intelligence Committee Chairman Adam Schiff, D-Calif., promised to subpoena for the evidence if Barr, a Trump appointee, balks at its release. 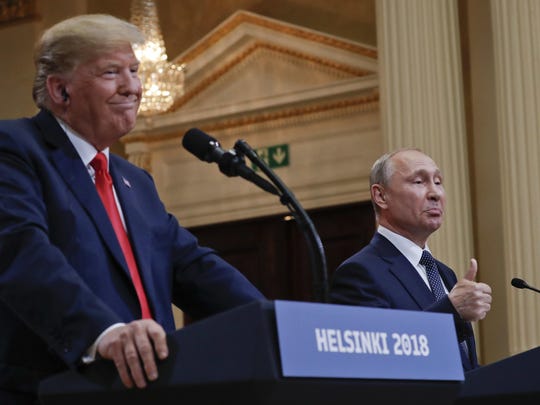 But it wasn't just Democrats calling for a full congressional vetting of Mueller's yearslong probe.

Sen. Pat Toomey, R-Pa., too, lobbied for the report's release, though not in terms nearly as strong as Grassley's.

Even the embattled president flippantly said the report should be made public just weeks before Mueller closed up shop. However, it's a sure bet the White House plans on invoking executive privilege to suppress Mueller's most damning verses.

Former FBI Director James Comey apparently forgot all this in late 2016 when he publicly chastised then-Democratic presidential nominee Hillary Clinton for her email use, a move that doubtlessly helped sink her campaign.

Yet there's nothing common about the Mueller probe.

That's why Congress must view Mueller's complete report, and the public should see anything that doesn't out sources or divulge intelligence-gathering methods.

Russia's goal was and is to undermine western alliances and foster general chaos. To that end, Russia's investment has paid dividends as Trump has, at nearly every turn, provoked the very allies that have stood by the U.S. for decades, while heaping praise and admiration on despots and tyrants.

And Trump, if only due to his own insecurities about his legitimacy, has refused to even acknowledge Russia's meddling crusade. The president's unwillingness to confront the issue means a real and lingering threat against American democracy goes unaddressed at the highest levels of government.

Mueller's narrative could, if nothing else, arm Americans with the information to combat Russia's assault on western democracies.

On Friday evening, right-wing talking heads couldn't contain themselves after Justice Department officials said Mueller would issue no further indictments. It's evidence the entire thing was a crock, they said. It was all a "witch hunt," they parroted.

And yet top Trump campaign advisers remain either convicted of felonies or charged with them by Mueller or other U.S. attorneys.

The right-wing echo chamber is once again getting ahead of itself. The attorneys at the Southern District of New York, where Trump's former fixer has openly accused Trump of a felonious cover up, continue their work unabated.

And the stigma that hangs over Trump and his inner circle cannot clear until Mueller's findings see the light of day.

Even if Trump, his family and his associates didn't knowingly conspire with Russian propagandists, there's no doubt that Russian dictator Vladimir Putin made every attempt to infiltrate the campaign.

It's equally apparent that conservative groups, such as the National Rifle Association, were deemed highly vulnerable and directly targeted by Putin's intelligence agents. And there can be no discounting the volume of meetings and chatter going on between Russians and those within Trump's orbit in mid- to late 2016.

At the end of the day, the American president has spent two years blasting the rule of law and cozying up to dictators, including the one who mounted a campaign against democracy itself. In so doing, Trump has seeded suspicion and, all the while, eroded public confidence in key American institutions.

The latter is a legitimate long-term threat to U.S. influence abroad and the American democratic experiment at home, a threat that only full transparency can hold at bay.