As Republicans in the House and Senate continue to reconcile their competing tax plans, it is instructive to reflect on just what this bill represents.

On Sunday, Republican U.S. Senator Susan Collins said she has not yet decided whether she will back the final measure negotiated by House and Senate leaders 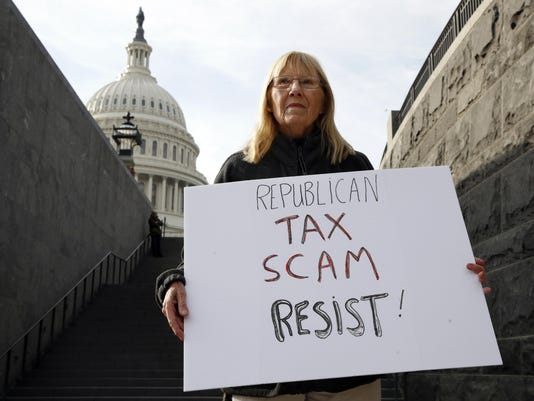 Cynthia Chaffee, of Tucson, Ariz., protests the Republican tax overhaul, Monday, Dec. 4, 2017, on Capitol Hill in Washington. "I'm in Washington visiting my grandkids," says Chaffee, "and they did that this weekend and I said oh I've got to go down there and speak my piece." (AP Photo/Jacquelyn Martin)(Photo: Jacquelyn Martin / AP)

As Republicans in the House and Senate continue to reconcile their competing tax plans, it is instructive to reflect on just what this bill represents.

Not the substance of the eventual $1.5 trillion plan. That’s pretty much decided: Half of the benefits go to the wealthiest Americans, while corporations enjoy huge tax breaks. The only unanswered question is whether the poor and working class will get screwed seven ways from Sunday to pay for it all, or if it will take eight ways.

But the way the bill is being bum-rushed into law — particularly in the Senate — is reflective of an unpalatable, unprecedented and, frankly, un-American congressional mindset.

The last major tax overhaul, passed during the second term of the Reagan Administration in 1986, was, as U.S. News & World Report accurately notes, “bipartisan, revenue neutral and the result of three years’ worth of thorough hearings.”

Compare that to the month-old, crafted-behind-closed-doors, hearings-free, lobbyist-rewarding, aggressively partisan hack job the middle class is likely to find under its Christmas tree in a few weeks.

Present-day Republicans may genuflect at the mention of Ronald Reagan, but he would not have crammed through so craven, unfair and mean-spirited a bill as House Speaker Paul Ryan, Senate Majority Leader Mitch McConnell and their like-minded congressional minions are now perpetuating.

Nor would he have shoehorned provisions into the bill that, for example, provide rights of citizenship to fetuses or undermine health insurance for millions of poor and working Americans.

That’s because Reagan, whatever his faults, attempted to govern. And governing is something the modern GOP has abandoned.

It began in earnest with the election of Barack Obama. It is well documented that congressional Republicans, McConnell among them, decided before the 44th president ever laid his hand on President Abraham Lincoln’s Bible to take the oath of office that they would oppose his every attempt at governing.

If that meant turning their backs on previously popular Republican ideas, like the affordable health care plan (which then-Massachusetts Gov. Mitt Romney pioneered), so be it.

If it meant closing down the government, and costing the economy billions, so be it.

If it meant turning their backs on even a modicum of gun control after 20 5- and 6-year-olds (and six adults) were slaughtered in a New Hampshire elementary school, well, they remained in lockstep and consistent.

Republican congressional leaders lost all interest in helping their own constituents if it meant compromising with the other party. The rank and file, egged on by far-right special interest groups and a conservative media that insist on ideological purity, reinforced the recalcitrance. The party turned its back on governing.

And now that they are in the majority … nothing has changed.

Republicans who for the eight years of the Obama administration opposed any legislation or spending that was not offset by corresponding budget cuts elsewhere are now falling all over themselves to add $1.4 trillion to the national deficit in a way that bypasses the need for a single Democratic vote.

They may win in passing the tax plan, if you want to call it that (and if you’re a corporation or among the nation’s wealthiest, you do), but this is not governing.

Denying a hearing for the nation’s first African-American president’s nominee for the Supreme Court, then having your own party make that nomination, then waving Senate rules to avoid a filibuster so he can be confirmed on a near-party line vote, may be a win, but it is not governing.

Attempting to repeal health care legislation that has seen more than 20 million Americans added to the nation’s insurance roles by way of rushed-through, back-room, one-party legislation is not governing. (Fortunately, that wasn’t a win, until they slipped it into the tax bill.)

Congressional Republicans have foresworn governing. They know how to bend legislative rules to exploit their slim majorities and benefit their bankrollers. And while controlling the White House and both houses of Congress, they may tally some wins. But, again, that is a long way from governing.

It is time for the governed to take note.