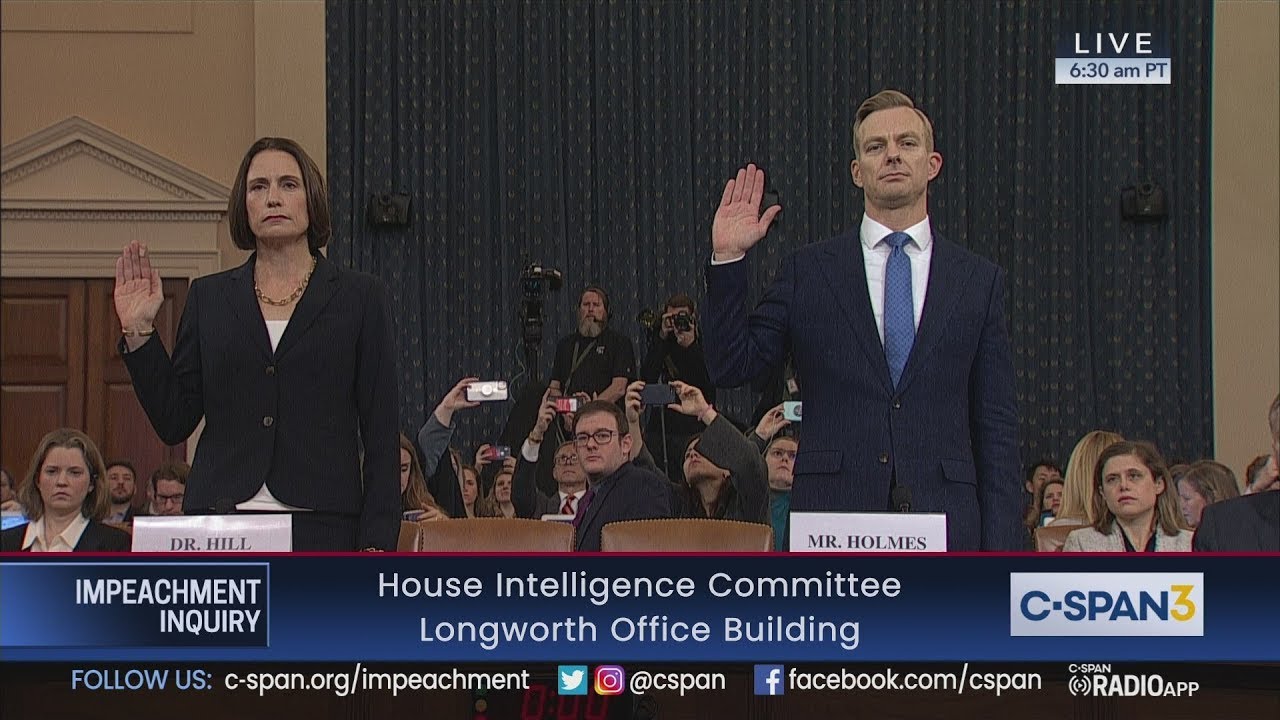 WASHINGTON – President Donald Trump and his GOP allies pressed a defense Thursday that he acted appropriately in withholding military aid to Ukraine out of concern over the country’s corruption and claimed the House impeachment hearings amounted to a rogue process.

The claims don’t match up with known facts.

A look at some of the remarks on Day 5 of public hearings in the impeachment inquiry by the House Intelligence Committee and Trump’s response:

CALIFORNIA REP. DEVIN NUNES, the top Republican on the committee: “President Trump had good reason to be wary of Ukrainian election meddling against his campaign.”

THE FACTS: That’s not credible. The theory that Ukrainians interfered in the U.S. election and that Democrats cooperated in that effort is unsubstantiated.

Fiona Hill, who was Trump’s special assistant to Trump on the National Security Council, testified Thursday that it was a “fictional narrative.”

Trump himself was told by his officials that the theory was “completely debunked” long before the president pressed Ukraine to investigate it anyway, according to Tom Bossert, Trump’s first homeland security adviser.

Broadly, the theory contends that a hack of the Democratic National Committee in 2016 was a setup designed to cast blame on Russia but actually was cooked up by or with the help of Ukrainians. But the evidence points conclusively to Russia, not Ukraine.

Based on evidence that includes a security firm’s findings that Russian agents had broken into the Democrats’ network and stolen emails, special counsel Robert Mueller indicted 12 members of Russia’s military intelligence agency and concluded that their operation sought to help Trump’s candidacy, not Hillary Clinton’s, as the conspiracy theorists and Trump have it.

NUNES: Trump also has good reason to be wary “of widespread corruption in that country.”

THE FACTS: He’s pointing to an oft-made defense by Trump and GOP allies that he withheld military aid to Ukraine because of concerns about corruption. But the hearings have produced bountiful testimony that Trump was singularly focused on making Democrats the target of Ukrainian investigations.

The committee is reviewing whether Trump pressed Ukraine for a political “favor” to investigate Democrats in exchange for the aid, as a whistleblower alleges and others have testified.

In his first phone call with Ukraine’s new leader, in April, the White House said at the time that Trump discussed his interest in having Ukraine rein in widespread corruption. But in the recently released rough transcript of the call, he did not mention corruption at all.

Trump had $391 million in congressionally approved U.S. assistance withheld from Ukraine from July to September.

The Defense Department had already certified to congressional committees on May 23 that Ukraine had made enough progress on reducing corruption to receive the military assistance. Before the July hold on the aid, the Trump administration had approved sending aid to Ukraine nearly 50 times without holding it because of corruption concerns.

Witnesses testified that Trump did not articulate concerns about Ukraine corruption other than expressing interest into investigations that would benefit him politically.

In his July 25 call, Trump told Ukrainian President Volodymyr Zelenskiy as they discussed military aid, “I would like for you to do us a favor, though” and investigate Joe Biden, his son and Democrats going back to the 2016 U.S. election, citing in part the discredited conspiracy theory involving Ukraine in that election.

Trump ultimately released the aid, on Sept. 11, after Congress became aware of what he had done. A few days earlier, congressional committees had begun looking into the matter, aware that a whistleblower had a complaint in motion.

TRUMP: “Keep fighting tough, Republicans, you are dealing with human scum who have taken Due Process and all of the Republican Party’s rights away from us.” – tweet Thursday.

THE FACTS: He’s off base. The House is conducting a hearing, not a trial, so no constitutional rights are being violated here. Trump would be afforded rights more akin to those in a criminal trial in later stages of the impeachment process if it proceeds.

Trump currently hasn’t been charged with anything and so has no constitutional right to be represented by a lawyer in this proceeding.

The hearings led by the House Intelligence Committee resemble the investigative phase of criminal cases, generally conducted in private and without the participation of the person under investigation.

In future House Judiciary Committee hearings that presumably would result in the drafting of impeachment articles, Trump would be invited to attend and his lawyers could question witnesses and object to testimony and evidence, similar to the process in the impeachment proceedings against Presidents Richard Nixon and Bill Clinton.

If there is a Senate trial, Trump’s legal team would defend the president against impeachment articles approved by the House in an environment that would look like a typical trial in some respects.