The 48th Distract Senate seat is one of two Senate positions up for grabs come midterm elections, but unlike the 28th District, Republicans have remained undefeated on Election Day in the deep-red region since its inception. 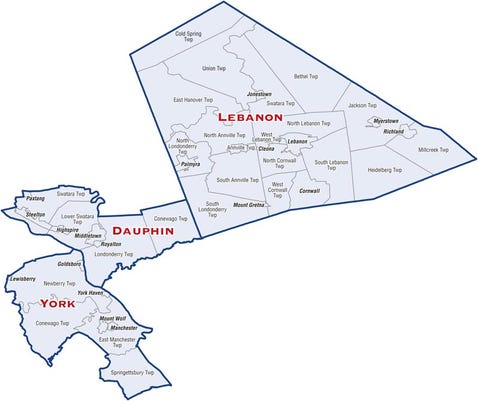 Pennsylvania's 48th Senate District seat is one of two in York County up for grabs come midterm elections — but unlike the 28th District, Republicans have remained undefeated on Election Day in the deep-red region since its inception.

The seat is currently held by Republican Sen. Mike Folmer, who is aiming to keep the red streak alive his a race against Democrat Lois Herr.

The district is comprised of all of Lebanon County, parts of Dauphin County and these municipalities in York County: Goldsboro, Lewisberry, Manchester, Mount Wolf and York Haven boroughs, and Conewago, East Manchester, Newberry and Springettsbury townships.

Folmer: Folmer, a Lebanon County native, has held the seat since 2006.

Before being elected into office, Folmer spent decades in a variety of professions, ranging from financial consultation to managing sales. He also served on the Lebanon City Council.

He's a founding member of the Constitutional Organization of Liberty, an educational project by the Alexander Hamilton Institute for Constitutional Studies designed to promote awareness of the country's founding principles.

Currently, he serves as chairman of the State Government Committee and is a part of the standing committees on education; intergovernmental operations; labor and industry; communications and technology; and rules and executive nominations.

Folmer admitted he is a "terrible self-promoter" when it comes to campaigning, but he's also is confident his record — and the district's conservative history — won't let him down on Nov. 6.

His record has come into the spotlight on multiple occasions, including his role in helping lead the fight to legalize medical marijuana in the state and advocating to reform how the state draws congressional lines, an effort that remains stalled in the Senate.

If re-elected, Folmer said he wants to continue pushing for redistricting reform, propose election code, labor law, tax and spending reform and "stay on the track we're on."

“I like to get stuff done," he said. "I don’t get all caught up in the political battles — that's the part I hate about this job. I love the policy, I love to do my job and I want to be effective."

Herr: Folmer's opponent, Herr, hasn't run for a state seat before, but she has a long history with the Democratic party and has run for the 11th District — previously the 16th District — congressional seat on three different occasions.

She previously chaired the Lancaster County Planning Commission, was on the Pennsylvania State Board of Barber Examiners and spent a year in the White House as the presidential interexchange executive for the Office of Management and Budget under former President Gerald Ford.

Herr currently serves as the chair of the Lebanon County Democratic Committee and is a member of the Mount Gretna Borough Council.

But she said her reasons for seeking the state Senate seat were a lack of Democratic input in the state's Republican-controlled General Assembly and a desire to increase female representation in government.

"Democrats don't have much of a voice in Harrisburg right now, and the good Democrats there need reinforcement," Herr said. "We haven't been able to accomplish things as a party that we've wanted to do."

What she wants to do, she said, is tackle a variety of policies with a focus on fairness and equity for all state residents.

Herr's platform consists of pushing to change how the state draws congressional lines, reforming the state's campaign finance laws and its "rigged" tax system and finding more money to put into all levels of education.

Herr said she might not have all of the answers, but she is "willing to work with people to find the answer, as our future depends on figuring out how to solve these problems."

Problems voting on Election Day?: The York Dispatch has partnered with the nonprofit news organization ProPublica for their Electionland program to help you report issues at the polls come Election Day Tuesday, Nov. 6.

It allows you to make voting problems in York County known, and it allows us to report on the issues and spread awareness in real-time. Learn more here.