Fifteen months out from the next election, U.S. Rep. Scott Perry is already facing competition for his seat in 2018. 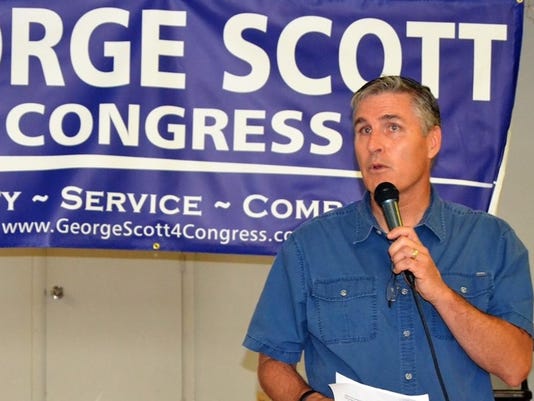 Fifteen months out from the next election, U.S. Rep. Scott Perry is already facing competition for his seat in 2018.

The Rev. George Scott, of Trinity Lutheran Church in East Berlin, announced his candidacy for Pennsylvania’s 4th Congressional District, becoming the first person to throw his hat into the ring to claim the Democratic Party’s nomination against Perry, R-Dillsburg.

Scott said Wednesday, Aug. 3, that he began meeting with a variety of groups at the end of May about launching a campaign after becoming “discouraged by the way I saw our political process function, particularly during the most recent election and the months leading up to it.”

Inspired by former President Barack Obama, who called on frustrated citizens to run for office, Scott said he wants to use his integrity, commitment to service and compassion in the nation's capital.

Scott also said he’s “hoping to bring maybe some sanity back to the political process, not just during the campaign, but once elected, to represent the interests of all people.”

“We need leaders that are going to put solutions over rhetoric and principles over partisanship,” Scott said.

Scott grew up in Adams County before heading to Georgetown University. Upon graduation, Scott joined the U.S. Army, serving 20 years on active duty, including multiple deployments during five years overseas. Scott retired from the Army as a lieutenant colonel. He and his family live in Dillsburg.

Campaign for 'freedom': Scott said he will spend the rest of 2017 going around the district, meeting with voters and learning what issues matter most to them.

Though still in the early days of his first campaign for office, Scott said he will focus on three core issues: health care, jobs and education.

More: GOP shows signs of reaching out to Democrats on health care

“I think each of these issues, if you peel back the layers, are issues about freedom,” Scott said.

Without health insurance coverage, the nation’s doctors and hospitals are out of reach for many citizens, severely restricting their lives, Scott said, adding he will “pursue health care that is accessible and affordable for all Americans.”

Quality education must be a critical part of the services provided by the federal government, as education is the pathway for people to land the jobs they want and deserve, Scott said.

“If you look at the history of our nation, I think you can pretty safely say that education is the doorway to freedom,” Scott said.

‘Uphill battle’: Scott is jumping into the race for the U.S. House quite early, with Perry less than seven months into his third two-year term.

During his initial meetings with potential constituents about launching a campaign, Scott said they recommended that he get started sooner rather than later.

Scott acknowledged he faces an “uphill battle running as a Democrat in this district,” so he launched his campaign early to give himself more opportunities to meet with constituents and raise money for what will likely be an expensive race.

“If people get to meet me and talk with me, they’ll understand I’ll have their best interests at heart,” Scott said.