A Washington Township attorney running in the hotly contested 31st Senate District to replace retiring Sen. Pat Vance has had his nomination petition challenged after he said he was encouraged to drop out of the race. 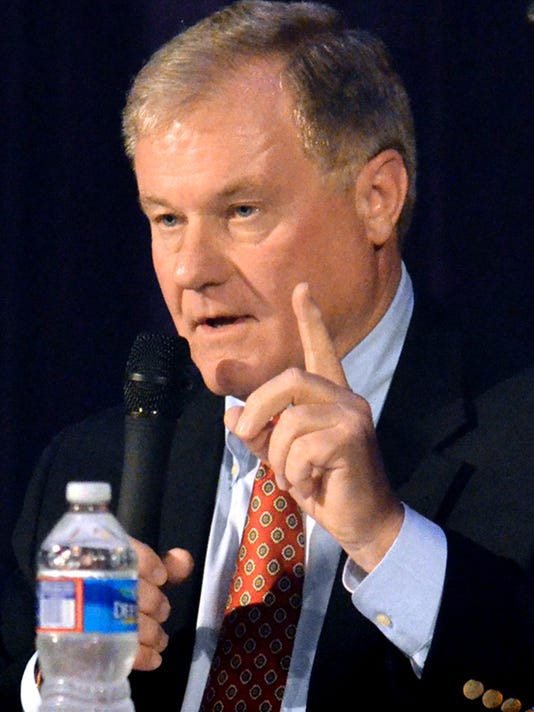 A Washington Township attorney running in the hotly contested 31st Senate District to replace retiring Sen. Pat Vance has had his nomination petition challenged after he said he was encouraged to drop out of the race.

"It wasn't like 'You gotta get out,'" High said of his conversation with Harper. But it was more along the lines of: "That it would be easier if he weren't in the race because he would dilute the York vote."

The race: Some politicos are assuming the primary race will ultimately be between perceived frontrunners Regan, who lives in York County, and Ritchie, who hails from Cumberland County. The race could be decided in the April 26 primary unless a third party or write-in candidate comes forward before the November election.

As of the end of February, there are 64,201 registered Republicans in the Cumberland County portion of the district but just 25,863 in the York County portion, according to the Department of State.

Wagner said he may have met briefly with Harper but couldn't recall, saying he meets a lot of people.

Asked if he'd ever encourage a candidate to leave a race, Wagner said: "Absolutely not. I would never do something like that."

Staying in: Harper said he has no intentions of voluntarily dropping out of the race and intends to fight the nomination petition challenge, filed by Buck County attorney Lawrence Otter on behalf of two men, in court.

"It hasn't scared me away but it has given me a big headache," Harper said. "If this was a lost cause, I would have pulled out."

A court date has been scheduled for Wednesday at 9:30 a.m. in Harrisburg, according to the Pennsylvania Department of State.

Harper said he doesn't believe there are enough legitimate objections to the 641 signatures he collected for a judge to remove him from the GOP ballot. State Senate candidates need 500 signatures from registered voters of the party they seek to represent on petitions to get on the ballot.

"But there aren't enough to take me below the 500 threshold," Harper said. "Almost every one of the objections is bogus."