The U.S. House Intelligence Committee's report on its impeachment inquiry into President Donald Trump's dealings with Ukraine has been made public. 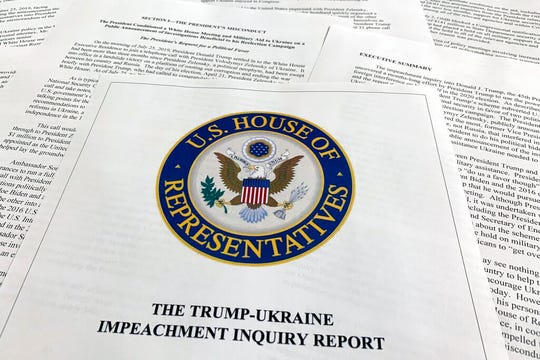 The report from Democrats on the House Intelligence Committee on the impeachment inquiry into President Donald Trump is photographed in Washington, Tuesday, Dec. 3, 2019. The House released a sweeping impeachment report outlining evidence of what it calls Trumpâ€™s wrongdoing toward Ukraine. The findings will serve as the foundation for debate over whether the 45th president should be removed from office. (AP Photo/Jon Elswick) (Photo: Jon Elswick, AP)

The U.S. House Intelligence Committee's report on its impeachment inquiry into President Donald Trump's dealings with Ukraine has been made public.

"President Trump’s scheme subverted U.S. foreign policy toward Ukraine and undermined our national security in favor of two politically motivated investigations that would help his presidential reelection campaign," the report reads. "The President demanded that the newly-elected Ukrainian president, Volodymyr Zelensky, publicly announce investigations into a political rival that he apparently feared the most, former Vice President Joe Biden, and into a discredited theory that it was Ukraine, not Russia, that interfered in the 2016 presidential election.  To compel the Ukrainian President to do his political bidding, President Trump conditioned two official acts on the public announcement of the investigations:  a coveted White House visit and critical U.S. military assistance Ukraine needed to fight its Russian adversary."

To read the full report, go to https://intelligence.house.gov/report/.