York County's post-election private debriefing set for next Thursday has raised flags for possible noncompliance with the state's Sunshine Act. 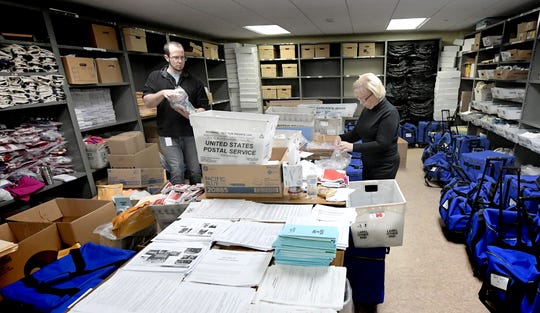 York County commissioners on Friday announced they would meet with state legislators and poll workers in private to come up with a plan going forward to address issues prominent in Tuesday's glitch-ridden municipal election.

The problem: If more than one commissioner were to attend, it would form a quorum of the county board. And the state's Sunshine Act states if a quorum is present, the meeting must be public.

York County Commissioner Chris Reilly said it was his understanding that all three commissioners would attend the meeting.

Reilly directed further questions to President Commissioner Susan Byrnes, who is organizing the debriefing. Byrnes did not respond to questions for comment.

Commissioner Doug Hoke, who doesn't sit on the Elections Board like the other two commissioners, said there were legitimate questions about whether the meeting would violate the Sunshine Act.

"I certainly want to be involved," he added when asked if he planned to attend.

The Sunshine Act states that "any prearranged gathering of an agency which is attended or participated in by a quorum of the members of an agency held for the purpose of deliberating agency business or taking official action."

A deliberation is defined as "the discussion of agency business held for the purpose of making a decision."

County spokesman Mark Walters confirmed the meeting — set to take place in the county's Administrative Center at an undetermined time — was private. But he stressed there "won't be any deliberating or decision making," even though York County Solicitor Michèlle Pokrifka said officials would discuss election policy.

State law provides for seven exemptions that would permit closed-door sessions, known as executive sessions, mostly in cases of individual personnel matters or for strategy sessions about litigation.

As a general rule, courts have ruled, public boards should assume meetings are open unless explicitly exempted under state law.

At Friday's meeting, Nikki Suchanic, directory of the county's Election and Voter Registration office, announced she will resign on Jan. 3 due to personal issues.

The announcement came after she highlighted issues with Tuesday's elections.

Tuesday's municipal elections were in disarray and final results were not tallied until Thursday. As of Friday morning, the results had still not been fully updated on the county's website.

Election results were delayed because of a shortage of ballot-counting scanners and technical glitches, which caused long lines, incorrect paper ballot sizes and many voters not knowing how to use the new machines, officials have said.