York County officials were still trying to tally the votes Wednesday morning after an election Tuesday marred by problems with new voting machines and long lines that frustrated voters and prompted the state GOP to seek an injunction. 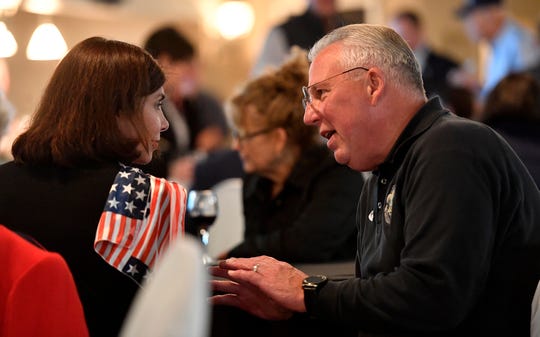 York County officials were still trying to tally the votes Wednesday morning after an election Tuesday marred by problems with new voting machines and long lines that frustrated voters and prompted the state GOP to seek an injunction.

The county's election website began showing results of some races around midnight, but by 7 a.m. the site was not indicating how many precincts had reported — meaning it was not known how many votes still needed to be counted. No results were reported for York City's races.

However, based on the information available, Republicans appeared to have the lead in the six county-wide contests.

York County Sheriff: In perhaps the most contentious race, Republican incumbent Richard Keuerleber has a strong lead over his former deputy Shane Becker, who is a Republican who appeared as a Democrat on the ballot. With 62,140 votes recorded, Keuerleber had 36,455 to Becker's 25,685.

York County Commissioner: The election site showed 115,216 votes cast, with Republicans Julie Wheeler (39,3480) and Ron Smith (34,404) in the lead. Democratic incumbent Doug Hoke (21,933) appears poised to claim the third spot on the board, but fellow Democrat Judith Higgins isn't far behind, with 19,531.

Treasurer: With 62,166 votes counted, five-term Republican incumbent Barbara Bair was far ahead of Democrat Ryan Supler, with 44,158 votes to his 18,008.

A majority of the races, unlike the York County Sheriff's race, were rather tame leading up the elections. But the judge race also had its moments.

Thompson, who also serves as president of the York NAACP, made headlines for more than one reason leading up to Tuesday's elections.

Discipline action: Last month, the state Supreme Court Disciplinary Board announced it would reprimand her for making "material misstatement of facts" to her clients in a Philadelphia lawsuit.

Thompson violated seven rules of professional conduct, according to the board. A public proceeding has yet to be scheduled.

She is also one of the five women who last year made national headlines after having the police called on them twice at Grandview Golf Course in Dover Township.

They alleged discrimination after former York County Commissioner Steve Chronister, whose family owns the course, called the police on them when the five wouldn't leave. He said he believed they were playing too slowly and were delaying other golfers.

Harrison was also one of the five women.