The candidate for the open judge spot on the York County Court of Common Pleas made the assertion Tuesday, April 30, at a question-and-answer panel at York College sponsored by the York County Bar Association.

"I believe my Christian faith and conservative values place me at a disadvantage among the bar association, because the members tend to not lean in that direction," Menges said.

The candidate was referring to a county bar association poll released last week in which more than half of the association's 486 members rated Menges and the other two candidates: York City-based attorney Sandra Thompson and Red Lion-based attorney Jonelle Eshbach.

The poll asked respondents to rate the judges on competence, integrity and temperament to determine if they are qualified.

Only 22.5% of respondents found Menges — the son of county Common Pleas Judge Chris Menges — to be at least "qualified," ranking him second among the three candidates.

Throughout the campaign trail, the Republican has been the most vocal about his political affiliation, promising to "uphold conservative principles" if elected to the bench.

Eshbach, who easily came out on top in the poll, with 81% of respondents finding her at least "qualified," responded to Menges' remarks Tuesday night, citing her similar religious and political values.

"I, too, am a person of Christian faith and conservative values," she said. "However, I think my experience as well as my interactions with people in the bar association have given them the opportunity to know I'm an approachable, reasonable person who will listen and work collaboratively." 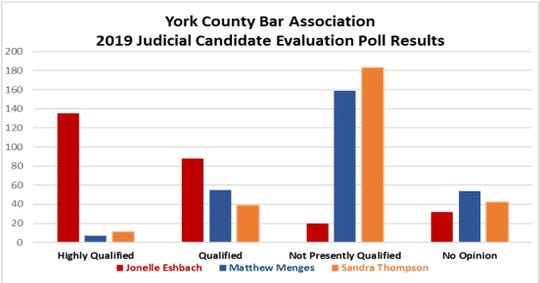 "I thought it was an interesting remark because I'm a Catholic," Connor said. "I really can't speculate on what he was trying to imply. Members of the bar association are of all faiths and backgrounds."

Menges leveled more criticism at the poll at Tuesday's panel event, alleging the results were influenced by how strong of a relationship the candidate has with members of the association.

The point also was made by Thompson, who said she was at a disadvantage because she is isn't well known among the association's members and doesn't work with them often. Only 18.8% of respondents found Thompson at least "qualified."

But that gripe is why respondents were allowed to select "no opinion" in their responses, Connor said, adding the association is still more than willing to make improvements in its polling process.

For example, the association is weighing suggestions such as holding the candidate forum before the poll and sending out footage of the forum to members to get to know the participants better ahead of time, Connor said.

It also is looking into sending out the candidates' resumes prior to the poll for the same reason.