Pennsylvania might still have four more years with the same governor, but Tuesday's primary election results ensured a new lieutenant governor beginning in 2019.

As Democratic Gov. Tom Wolf prepares to take on fellow York County millionaire state Sen. Scott Wagner, R-Spring Garden Township, he will be doing so with a new running mate.

Wolf and Fetterman met for lunch Wednesday, May 16, at Manchester Cafe in East Manchester Township — less than a mile from Wagner's Penn Waste facility.

Fetterman said he and Wolf discussed their shared roots in York County.

"He helps marry the two wings of the Democratic Party," Madonna said, noting that Wolf has very liberal positions but has had to deal with four years of working with a very conservative Legislature.

Fetterman said he believes Wolf will be just fine running on his own record, and if he can help contribute in any small way, he's happy to do that.

Braddock Mayor John Fetterman, who was elected Lt. Gov. on the Democratic ticket in the primary election Tuesday, waits for running mate Gov. Tom Wolf as they meet for lunch at Manchester Cafe in Manchester Township, Wednesday, May 16, 2018. Dawn J. Sagert photo The York Dispatch
Fullscreen 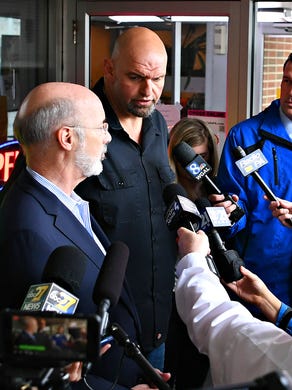 Madonna said that ultimately people will vote based on the gubernatorial candidate's agenda, but Fetterman could help increase Democratic voter turnout.

Wolf said the key for their campaign will be developing a relationship based on mutual respect and trust.

Wolf's relationship with Stack had publicly soured — Wolf last year ordered an investigation into the treatment of state employees by Stack and his wife and stripped Stack of state police protection.

Asked outside the cafe about his relationship with Stack, Wolf briefly paused before thanking the outgoing lieutenant governor for his service.

More: Battle of the businessmen: Wagner and Wolf highlight 2018 race

"The anti-Trump sentiment among Democrats is huge," he said, though he added that a lot could change between now and November.

Less than 17 percent of registered county Democrats voted, down from about 22 percent during the last midterm primaries in 2014, according to county voting records.

Chad Baker, chair of the York County Democrats, said he thought the competitive 10th Congressional District race — where George Scott edged out Shavonnia Corbin-Johnson in a four-candidate race — would draw more to the polls. 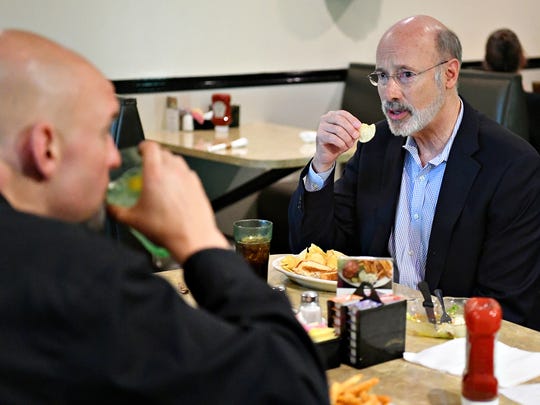 He suggested low turnout was a symptom of a larger, general dissatisfaction with politics.

"People are tired of politics," Baker said. "It’s been very divisive for the past few years. People are turned off by the whole process."

Higher for GOP: York County Republicans countered with more than 25 percent of registered voters showing up to the polls Tuesday, up from less than 20 percent in 2014.

He added that he believes local Republicans are more energized behind Wagner than they were for then-incumbent Gov. Tom Corbett in 2014 because they know Wagner more intimately.

Wagner will be running with Jeff Bartos, of Montgomery County, and the two have been campaigning together for months despite the governor and lieutenant governor races being separate on the primary ballots.

Madonna said the two are dynamically suited as a pro-Trump ticket that should appeal to the same base of voters who helped the president win Pennsylvania in 2016.