Across the globe, rallies against Trump, sexual misconduct

Across the globe, people are hitting the streets on the one-year anniversary of President Donald Trump's inauguration, marching against his policies and in support of the #MeToo movement against sexual assault and harassment.

Across the globe, rallies against Trump, sexual misconduct 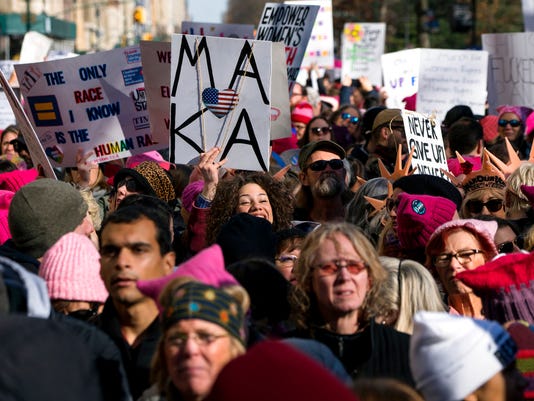 People line up on Central Park West as they wait for the start of a march highlighting equal rights and equality for women Saturday, Jan. 20, 2018, in New York. The New York protest was among more than 200 such actions planned for the weekend around the world. (AP Photo/Craig Ruttle)(Photo: Craig Ruttle, AP)

NEW YORK — Across the globe, people are hitting the streets on the one-year anniversary of President Donald Trump's inauguration, marching against his policies and in support of the #MeToo movement against sexual assault and harassment.

A protest in New York was among more than 200 such actions planned for the weekend around the world. By mid-morning, people gathered in Chicago, Los Angeles, Denver and Raleigh, North Carolina. In Philadelphia, many marchers wore pink cat-ear hats as a show of solidarity, while others carried signs stating opposition to Trump and his policies.

Earlier Saturday, dozens of activists gathered in Rome to denounce violence against women and express support for the #MeToo movement. They were joined by Italian actress and director Asia Argento, who made headlines after alleging in 2017 she had been sexually assaulted by Hollywood producer Harvey Weinstein in the 1990s.

The 2017 rally in Washington, D.C., and hundreds of similar marches created solidarity for those denouncing Trump's views on abortion, immigration, LGBT rights and more. Millions of people around the world marched during last year's rallies, and many on Saturday thought about all that's happened in the past year.

"I'd be lying if I said that I'm not dispirited and discouraged over having to march yet again to register our opposition to this disastrous first year of the Trump presidency," said Peggy Taylor, a New York City tour guide and Manhattan resident.

She said that last year, she felt "a kind of euphoria" walking through the city with hundreds of thousands of participants.

This year, "the hard reality of what lies ahead of us has sunk in," she said. "I know that we have a long slog ahead of us to undo the damage that this man has inflicted."

In New York, scheduled speakers included Ashley Bennett, a Democrat who was elected Atlantic County, New Jersey, freeholder last November. Bennett defeated Republican incumbent John Carman, who had mocked the 2017 women's march in Washington, D.C. with a Facebook post asking whether the women would be home in time to cook dinner.

Among the goals of this year's march are getting more Democrats to run for public office and bolstering voter registration.

In Rome, the 42-year-old Argento addressed the criticism she received once she spoke up about her abuse. 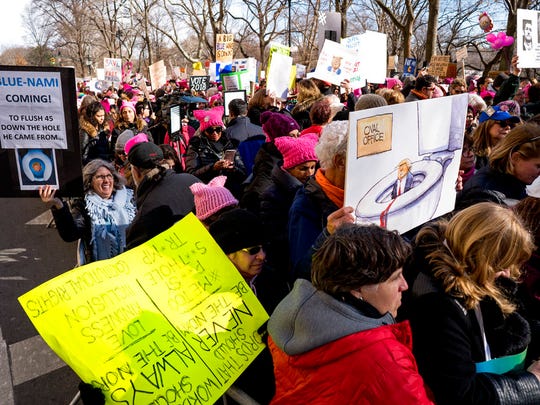 People line up on Central Park West as they wait for the start of a march highlighting equal rights and equality for women Saturday, Jan. 20, 2018, in New York. The New York protest was among more than 200 such actions planned for the weekend around the world. (AP Photo/Craig Ruttle) (Photo: Craig Ruttle, AP)

"Women are scared to speak and because I was vilified by everything I said, I was called a prostitute for being raped," she said at the rally. "I wonder how women who received such violence would find the courage to come out as I did, when they saw what happened to me, so I am here to assess the necessity of women to speak out and change things."

Argento was strongly criticized by many Italian media and Italian women for not speaking out earlier and was hounded on Twitter with accusations that she sought trouble.

Last year's march in Washington sparked debate over inclusion, with some transgender minority women complaining that the event seemed designed for white women born female. Some anti-abortion activists said the event did not welcome them.

The organizers for the Sunday rally are striving for greater inclusion this year, with Latina and transgender female speakers, said Carmen Perez, another co-chair of the 2017 Washington march. Women in the U.S. illegally, sex workers and those formerly incarcerated are welcome, she said.

Linda Sarsour, one of the four organizers of last year's Washington march, said Las Vegas was slotted for a major rally because it's a strategic swing state that gave Hillary Clinton a narrow win in the presidential election and will have one of the most competitive Senate races in 2018.

The rallies also laid the groundwork for the recent movement that brought a reckoning for powerful men accused of sexual misconduct, Sarsour said.

"I think when women see visible women's leadership, bold and fierce, going up against a very racist, sexist, misogynist administration, it gives you a different level of courage that you may not have felt you had," she said.