Folmer puts redistricting reform on hold due to lawsuit

Efforts to change the way Pennsylvania’s congressional district maps are drawn will have to wait.

Folmer puts redistricting reform on hold due to lawsuit 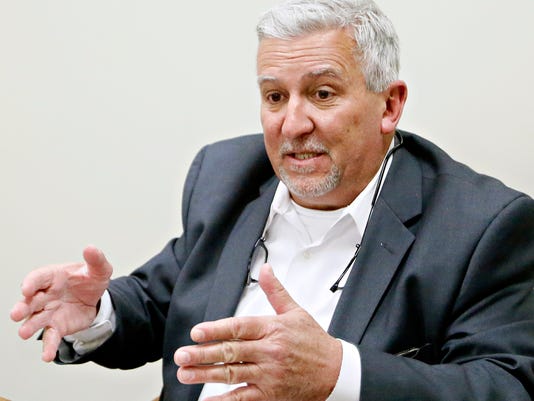 State Sen. Mike Folmer, who represents part of York County, is concerned with the ability of the state election system to withstand hacking.(Photo: The York Dispatch)Buy Photo

Efforts to change the way Pennsylvania’s congressional district maps are drawn will have to wait, with state Sen. Mike Folmer postponing hearings on the issue until a gerrymandering lawsuit against legislative leaders is resolved.

Advocates from Fair Districts PA, the League of Women Voters, the NAACP and other good-government groups rallied in the state Capitol Tuesday, Sept. 12, to call on Folmer to reschedule a hearing on Senate Bill 22, which aims to establish an independent redistricting commission through an amendment to the Pennsylvania Constitution.

As chairman of the Senate’s State Government committee, Folmer has “hit the pause button” on holding any hearings on redistricting reform because of the League of Women Voters’ lawsuit filed in June, Fred Sembach, the senator's chief of staff, said Wednesday, Sept. 13.

The lawsuit is seeking a ruling from the state Commonwealth Court that strikes down the state’s current congressional maps and orders new maps to be created.

Because the lawsuit requests all records relating to how those maps were drawn in 2011, legislators have been advised by legal counsel to hold off on any public hearings regarding the 2011 maps, Sembach said.

As part of a redistricting-reform public hearing, “we would like to talk about people’s thoughts, problems and concerns with how the 2011 lines were drawn,” Sembach said. “(But) if you have a public hearing, then you’re kind of feeding into the lawsuit.”

Excuse to hide: Fair Districts PA Chair Carol Kuniholm said Wednesday, Sept. 13, that she and other reform advocates believe legislators are using the lawsuit as an excuse not to discuss Senate Bill 22, which could take redistricting power out of their hands.

“I think they’re happily saying ‘Somebody told us not to (talk about redistricting),’” Kuniholm said. But in most professions, saying “‘I can’t do my job because somebody told me not to’ is grounds for dismissal.”

In the past year, Kuniholm and Fair Districts PA have held more than 200 public meetings about the perils of partisan gerrymandering, showing constituents how the practice allows lawmakers to be unresponsive to their constituents without any fear of losing their seats.

Folmer and other legislators’ insistence that they can’t talk about efforts to reform future redistricting processes because of a pending lawsuit about past practices shows lawmakers feel they don’t have to address constituents’ concerns, said Bob Warner, a volunteer with Fair Districts PA and Common Cause.

“It’s a symptom of the problem we have that they think they can fail to meet with constituents and get away with it,” Warner said.

Legal limbo? Sembach said Folmer is committed to election-reform efforts, but he is wary of calling Senate Bill 22 a reform package until it can be vetted by lawmakers and the public.

But with the pending lawsuit, there can be no public vetting by lawmakers, according to Sembach.

The apparent legal limbo “is a creation of Senate Republican attorneys to try and kill the bill without even taking a vote on it,” Warner said.

There is only a small window of opportunity for lawmakers to establish an independent citizens redistricting commission through a constitutional amendment.

To amend the state constitution in time for the next district-map redraw, Senate Bill 22 or a similar bill must be passed by both legislative chambers in the 2017-18 session and the 2019-2020 session.

The potential amendment must then pass in a public referendum in 2020 to take effect in time for the next district redraw.

With Folmer delaying redistricting-reform hearings until a resolution of the lawsuit, that small window of opportunity might not reopen before the end of this session, making it impossible to amend the constitution before 2021, when the maps will be redrawn, Warner said.

“It’s a serious concern. It really threatens the viability of these bills,” Warner said.

The Commonwealth Court will hear arguments at 10 a.m. Oct 4 regarding an application filed by Turzai and Scarnati seeking a stay in the League of Women Voters' lawsuit.